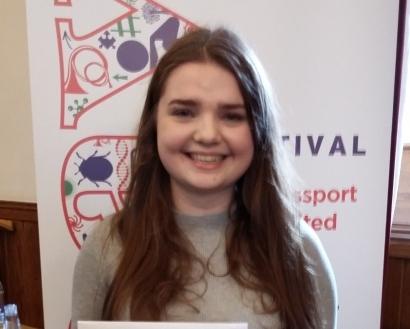 A short story based in war-time Aberdeen has scooped a literary award and a £500 prize for a university student.

Aemilia Balkham Ross, from Inverness, was awarded the 2015 Toulmin Prize at a special event at the May Festival.

Organised by the Elphinstone Institute, University of Aberdeen, the Toulmin Prize has been running since 2008 and commemorates the work of John Reid – otherwise known as David Toulmin – one of the finest and best-known exponents of written Doric.

Aemilia’s work, titled ‘Siren City’, was selected as the winner by a panel of judges and she received her award at the May Festival, a celebration of literature, music and science held annually in Old Aberdeen, where her entry was read by writer and story-teller Sheena Blackhall.

It tells the story of one woman’s childhood experience during the worst bombing to hit Aberdeen during the Second World War.

We are so pleased to be involved with the Toulmin Prize again and it's wonderful to have a young, promising writer coming forward." Tom McKean

Aemilia, 19, is studying for a Joint Honours degree in Politics and English Literature at the University of Aberdeen. The Toulmin Prize is her first win in a major writing competition and marks another step towards her ambition to become a published author.

Her winning entry will be printed in the July-August Leopard magazine later in the year and she is working on a number of other writing projects alongside her studies.

Aemilia said: “The Toulmin Prize, and the May festival as a whole, is a wonderful celebration of all the artistic and literary talent on offer in Aberdeen. To have been able to participate in, far less have won, a competition which is so closely connected to one of Aberdeen’s great writers was incredible, and having my short story read by another of the North-East’s best literary minds was a wonderful reward in itself.”

Dr Tom McKean, director of the Elphinstone Institute at the University of Aberdeen, said: “We are so pleased to be involved with the Toulmin Prize again and it’s wonderful to have a young, promising writer coming forward.”