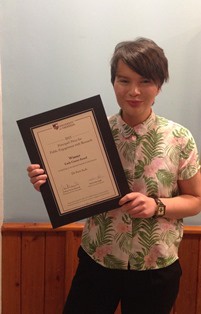 Dr Fern Insh, who recently received her doctorate in History of Art from the University of Aberdeen, has been awarded the Principal's Prize for Public Engagement with Research in the Early Career Researcher category.

Principal Sir Ian Diamond presented Fern with a certificate and prize on 31 May at a ceremony prior to Gavin Esler's Mayfest talk, 'Lessons from the Top'.

Fern received the award for three years' work with her website 'Scottish Art Blog'. The site promoted the work of young Scottish artists by highlighting the contextual importance of their work. It also provided reviews of contemporary exhibitions from an academic perspective in order to monitor and define continuity and change in Scottish visual culture during the Referendum.

With a large national following, Fern used her website's outreach to enhance public engagement at galleries and institutions, such as the Royal Scottish Academy. Fern also offered outreach and engagement advice to contemporary Scottish artists who she felt represented major developments in Scottish visual culture.