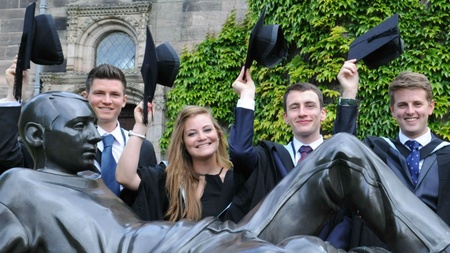 An internationally renowned conductor and a number of leading scientists and academics are among those being honoured at the University of Aberdeen's Winter graduations this week.

Dr John Smith CBE (known as Ed) will receive an honorary Doctorate of Laws (LLD) on Thursday, November 27.  Dr Smith is the former Chief Operating Officer of Global Assurance and Strategy Chairman of PricewaterhouseCoopers. He retired in 2007 from a very successful 30 year career which included many leading roles in the UK and globally. He now enjoys a variety of Board roles and is also Pro Chancellor and Chairman of Council for the University of Birmingham.

On Thursday afternoon Professor James Jordan will be awarded an honorary Doctorate of Music. Professor Jordan is an internationally recognised conductor, writer and innovator in choral music and is currently professor and senior conductor at Westminster Choir College. His recording of ‘Annelies’ received a 2013 Grammy nomination for Best Choral Performance. In 2012 he received the lorio Research Prize from Rider University.

The University of Aberdeen is delighted to recognise the achievements of such talented and distinguished individual and I would like to welcome them to the University family. " Professor Sir Ian Diamond

The same award will also be presented to Professor Frances Mary Ashcroft, the Royal Society GlaxoSmithKline Research Professor at the University Laboratory of Physiology at Oxford. In 2012, Professor Ashcroft won the top award in the L’oreal-Unesco for Women in Science Awards for her contribution to science.

Professor Sir Leszek Krzysztof Borysiewicz will also receive an honorary Doctorate of Science on Friday. Professor Sir Leszek Borysiewicz became the 345th Vice-Chancellor of the University of Cambridge in 2010. He was knighted in the 2001 New Year’s Honours Lists or his contribution to medical education and research into developing vaccines, including his work towards a vaccine to combat cervical cancer.

“These inspirational individuals have attained huge success in their fields and provide a strong example for our granduands of the success which they too can achieve.”

Edward (Ed) Smith is the former Global Assurance COO and Strategy Chairman of PricewaterhouseCoopers. He retired in 2007 from a highly successful 30 year career which included many leading Board and top client roles in the UK and globally. He now enjoys a portfolio of Board roles in Education, sport, health, transport, thought leadership and sustainable development. In 2014 Ed Smith demitted office as Chairman of WWF-UK, Chairman of British Universities & Colleges Sport and Chairman of the Student Loan Company. He is Deputy Chairman of NHS England, Chairman of the Crown Commercial Service, a Non-Executive Board member of the Department for Transport, a Member of Council and Treasurer of Chatham House and is a member of the UK Competition and Markets Authority. He is also Pro Chancellor and Chairman of Council for the University of Birmingham. Mr Smith was awarded a CBE in 2014

James Jordan is internationally recognised as one of the United States pre-eminent conductors, writers, and innovators in choral music. At Westminster Choir College, he is Professor and Senior Conductor, and conducts the Westminster Schola Cantorum and the Westminster Williamson Voices. Professor Jordan is the most published performer/author in the world, with more than more than 30 books on all aspects of the choral art to his credit. Professor Jordan has made two recordings of the music of James Whitbourn with the Westminster Williamson Voices on the Naxos label. Another recording, ‘Angels in the Architecture’, has also garnered wide critical acclaim. Gramophone hailed him as a conductor of “forceful and intimate choral artistry” and regarding the recording of ‘Annelies’, Choir and Organ wrote, “Jordan’s instinctive understanding of the score makes this a profound and emotionally charged experience.” His recording on NAXOS of ‘Annelies’ received a 2013 GRAMMY nomination for Best Choral Performance. Professor Jordan’s writings have shaped far-reaching changes in conducting pedagogy and the teaching of rhythm applying Laban Effort/Shape to music teaching at all levels. In 2012, he received the Iorio Research Prize from Rider University. His residencies, master classes, and guest conducting have taken him throughout the United States, Canada, Europe, and Australia.

Professor Albert Rodger, Vice-Principal for External Affairs retired in 2014. Professor Rodger joined the University as a Lecturer in Engineering in 1979. During his career he held many roles including Head of Department of Engineering, Dean of the Faculty of Science & Engineering and Head of College of Physical Sciences. A Fellow of the Royal Academy of Engineering, he was awarded its prestigious Silver Medal. Throughout his career Professor Rodger has engaged in research into geotechnical dynamics. In 1997 he was awarded the Halcrow Premium from the Institution of Civil Engineers for his research and the John Logie Baird Award for Innovation for an invention which has the Trade Mark GRANIT. In 2000 GRANIT was awarded Millennium Product Status. Professor Rodger’s extensive links with the energy industry further strengthen the University’s working relations with the sector. In April 2014 he was awarded Honorary Citizenship of Hadong County in the Republic of Korea for his contribution to the development of the region’s offshore industry. He also fostered cultural and science engagement in Aberdeen through roles with the Aberdeen International Youth Festival, TechFest and the University’s May Festival. A member of the Scottish Funding Council, he chairs its Research & Knowledge Exchange Committee.

Frances Ashcroft is the Royal Society GlaxoSmithKline Research Professor at the University Laboratory of Physiology, Oxford and a Fellow of Trinity College, Oxford. Professor is an eminent medical physiologist.  In 2012 she won the top award in the L’ORÉAL-UNESCO For Women in Science Awards for her contribution to science. The award recognised Professor Ashcroft’s work in advancing the understanding of insulin secretion and a type of diabetes that develops in the first months of life. Professor Ashcroft’s research group has an international reputation for work on insulin secretion, type II diabetes and neonatal diabetes. Her collaborative work with Professor Andrew Hattersley has helped to enable children born with diabetes to switch from insulin injections to tablet therapy. She has written a text book ’Ion Channels and Disease’ and is Director of OXION, a training and research programme on the integrative physiology of ion channels, funded by the Wellcome Trust. Professor Ashcroft holds BA, PhD and ScD degrees from the University of Cambridge University and was elected a Fellow of the Royal Society of London in 1999.

Professor Sir Leszek Borysiewicz became the 345th Vice-Chancellor of the University of Cambridge in 2010. He was Chief Executive of the UK's Medical Research Council from 2007, and from 2001 to 2007 was at Imperial College London, where he served as Principal of the Faculty of Medicine and later as Deputy Rector. Born in Wales, to Polish parents who settled there after the Second World War, he attended Cardiff High School and went on to the Welsh National School of Medicine, later taking up clinical and research posts in London. In 1988 he came to Cambridge as Lecturer in Medicine, and was a Fellow of Wolfson College. He went on to be Professor of Medicine at the University of Wales for the ten years until 2001. Sir Leszek also served as a Governor of the Wellcome Trust (2006-2007), Chairman of the UK Clinical Research Collaboration's Integrated Academic Training Awards Panel (2005-2007), and Chair of the HEFCE RAE Main Panel A Assessment Panel. Professor Borysiewicz was knighted in the 2001 New Year's Honours List for his contribution to medical education and research into developing vaccines, including work towards a vaccine to combat cervical cancer. He was elected a Fellow of the Royal Society in 2008.