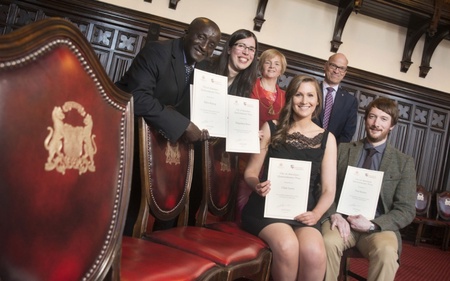 An Aberdeen dental student who is leading a group of her classmates to Africa this summer to teach oral health to locals is among four students to receive the 2015 Quincentenary Prize from the University of Aberdeen.

Clare Lowe received the award alongside fellow winners, dental student Paul Roden, Buba Bojang from the School of Law and Magdalena Blanz from the Chemistry department.

The annual Quincentenary Prize was established to mark the University’s 500th anniversary and recognises the exceptional efforts and talents of students.

The students were each presented with a £1000 cash prize and medal in honour of their achievements by the leader of Aberdeen City Council, Jenny Laing alongside Senior Vice-Principal Professor Jeremy Kilburn, at a ceremony held at the Aberdeen City Council Town House on Thursday May 14.

Clare will travel to Musoma in rural Tanzania with other students from Aberdeen Dental School to implement an oral health programme that Clare has developed. In nominating her, Dr Rona Patey described Clare as “a remarkable young woman”.

Fellow dental student Paul Roden who worked as a pharmacist before deciding to retrain as a dentist, was honoured for his work as President of the Aberdeen Dental Society. In the role he has been active in fundraising and the implementation of improved processes within the school.

Buba Bojang, a PhD student at the School of Law was elected as President of the school’s Legal Research Society (LRS) in 2013. The LRS is a student-led and run initiative responsible for running academic and social events. Under Buba’s leadership, lecturer Dr Irène Couzigou says the LRS has been transformed from a “situation of dormancy to a very vibrant and active society”.

Magdalena Blanz, currently in year 4 of 5 in her Masters of Chemistry degree is an outstanding student who has received five awards for academic excellence over the last three years including the 2014 Royal Society of Chemistry Analytical Chemistry Summer Studentship, worth £1440. She has also held three internships which saw her based in Alaska and the Friedrich-Schiller-University Jena in Germany.