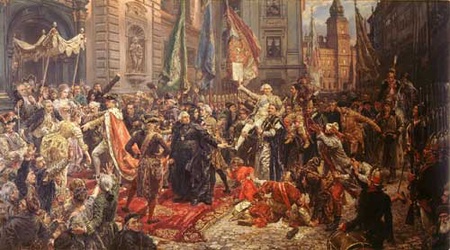 An Aberdeen historian will address the highest court in Poland as part of celebrations to mark the anniversary of the signing of a constitution acknowledged as a revolutionary document in the political history of the world.

Professor Karin Friedrich, from the University of Aberdeen, has been invited to present the key note speech for Poland’s national celebration of the anniversary of the Constitution of 3 May 1791 in Warsaw.

She will give a presentation before Poland’s Constitutional Tribunal on May 4, the country’s highest court, and the audience will include high-ranking figures from Polish political and public life.

The Constitution was only the second written constitution in the world and—just like its predecessor the American Constitution—it represented an important milestone in the development of democratic ideals in the western world.

Although it only lasted for 18 months and was never properly implemented due to the partitions of the country between Russia, Prussia and Austria between 1772 and 1795,  the Constitution gave rights to citizens and limited the powers of nobility and set the blueprint for many other European countries to follow.

Professor Friedrich, an expert in Early Modern History, said it was an honour to be asked to speak as part of Poland’s national celebrations of this landmark document.

“The constitution married the long-standing traditions of liberty and consensual government which had characterised the Polish-Lithuanian Commonwealth for over two centuries, with the Enlightenment ideas of the separation of powers and what we consider basic human rights today, such as liberty of speech and religious conscience. The vision of 1791 is recognised as an expression of remarkable political will in times of great adversity,” she said.

The memory of the 1791 Constitution nurtured political aspirations of many successive generations of Poland’s citizens. The flame of democracy was kept alive and eventually led to the restoration of Poland’s independence in 1918.

“It is a privilege to be asked to speak in front of such an important audience on the anniversary of the proclamation of this document - a pioneer in shaping the democracy in Europe which we enjoy today.”

Professor Friedrich’s speech will focus on the historical role of the province of Polish Prussia in the political and intellectual life of the Polish-Lithuanian Commonwealth in the eighteenth century.

The event is one of the most high-profile celebrations taking place across Poland, where May 3 is a national holiday in recognition of the significance of the signing of the Constitution.