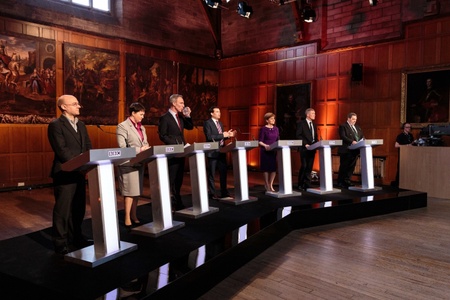 Scotland's party leaders went head to head on Wednesday 8 April in a vigorous debate ahead of May's General Election.

There were mixed views on who came out top on the evening – apart from Elphinstone Hall itself.

With the University’s priceless ‘Black Paintings’ on view and a set constructed to show off the magnificent wood-panelled interior, the venue brought together not only the six political parties - but current students and alumni, and history with future.

Nostalgia and anecdotes from former students around the country were soon trending on twitter as the University’s far-flung community exchanged stories and photos of their times on campus.

The debate was covered by all the main UK media, most of whom were present on campus.  In addition to the event itself, over 8 million people across the UK tuned in for news broadcasts from the lawn.