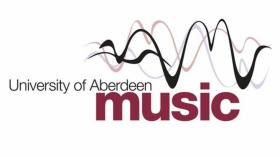 Joint winners Alison Ewan and Ellen Smith will share the £1,250 annual prize and perform live at this year’s May Festival on Saturday 30 May, in addition to the Aberdeen International Youth Festival, and Aberdeen Performing Arts’ Culture Café series.

Alison Ewan, a final year BMus student plays Scottish fiddle and has specialised in the Shetland style, performing last year at the funeral of former University rector Dr Maitland Mackie. Ellen Smith, who is also a final year student specialises in percussion, having performed with all of the orchestras at the University.

The prize is awarded annually to an undergraduate studying at the University of Aberdeen. This is the 8th year that the competition has run and previous winners have featured as a prominent part of the musical life of the University, performing at graduations and concerts.

The 2015 Ogston Music Prize finalists were:

Niall Anderson is a third year BMus student studying the bass voice and who has sung with the University’s Choral Society, Chamber Choir, Opera Society and Chapel Choir, recently performing the bass solo in Mozart’s Requiem with the Choral Society.

Alison Ewan, a final year BMus student playing in Scottish fiddle who performed, at the pre-selection stage, a beautiful set of pieces from Shetland, a style in which she has specialized as part of her studies. She performed recently at the funeral of former University rector Maitland Mackie.

Lucy Hole, a final year soprano who specializes in opera. She has sung many roles in the University Opera Society and earlier this month, she conducted the group in performances of Janacek’s The Cunning Little Vixen.

Ben Light, a final year BMus Music and Communities student, who plays alto saxophone and is a stalwart member of many of the University’s music ensembles. He has won many awards both at school and since coming to Aberdeen to study and recently performed at the Aberdeen Jazz Festival.

Julian Lloyd Webber is one of the finest musicians of his generation, a world-class cellist, conductor and passionate advocate for music education." Professor Pete Stollery

Carly Mills, a third year BMus student who plays piano and who has enjoyed success in music competitions in both Aberdeen and her home town of Edinburgh.

Ellen Smith, a final year BMus student specializing in percussion. She has performed with all of the orchestras at the University and will continue her studies at masters level next year.

Julian Lloyd Webber was joined on the judging panel by two eminent musicians from Aberdeen - Sonia Scaife, Director of the Aberdeen City Music School and Alistair MacDonald, who retires from his post at the University of Aberdeen this year. As the judges deliberated over their decision, last year’s Ogston Music Prize winner, pianist Maria Vilberg, played Chopin’s Andante Spinato, op.22.

It is the first time Lloyd Webber has featured on the Ogston Music Prize judging panel, which always includes an eminent external professional musician.

He has premiered more than sixty works for cello and has inspired new composition from a diverse range of composers but a neck injury forced him to retire from performing last year. He vowed instead to “use the knowledge gained through life as a musician to give back as much to the music profession which has given me so much over the years”.

Professor Pete Stollery, Head of Music at the University of Aberdeen, said it was an honour to have a musician of Lloyd Webber’s standing on the judging panel.

“Julian Lloyd Webber is one of the finest musicians of his generation, a world-class cellist, conductor and passionate advocate for music education. It is fitting that someone of such high calibre, not only in performance but also in education, should be chairing the judging panel in this hugely important event in the musical lives of these six music students. We are privileged to be able to benefit from his experience and his wisdom.”