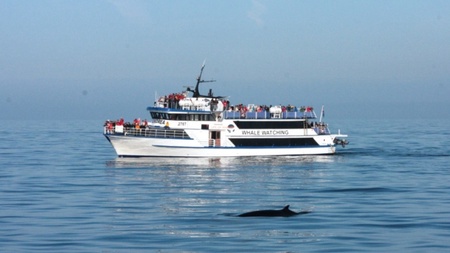 Wildlife tourism, like whalewatching, can substantially disrupt the activities of the animals targeted but does it threaten populations with extinction?

In an attempt to understand whether this industry poses a conservation threat, researchers from the University of Aberdeen have carried out a study on the effects of whalewatching on north Atlantic minke whales.

The results, published in the Conservation Letters journal, have not only shed light on the effects of whalewatching itself, but also provided a framework that can be used to evaluate the consequences of human disturbances for the conservation of wildlife more generally.

“In this study we tried to evaluate the long-term consequences of whalewatching disturbance on minke whales in Faxaflói bay, Iceland,” explained Dr David Lusseau from the University of Aberdeen’s Institute of Biological and Environmental Sciences. “More specifically, we wanted to know if repeated disruptions of feeding behaviours could end up affecting the reproductive success of pregnant females.

“We found that although whalewatching boats caused whales to stop feeding and move away, most whales only encountered a handful of whalewatching boats throughout the feeding season in Iceland. Therefore these disruptions resulted in negligible effects on the whales’ body condition and reproduction.

“While this case study focused on minke whales and the effects of whalewatching, the proposed framework will be very valuable. The frequency of interactions between humans and wildlife is increasing globally, and hence understanding how disturbance can affect the long-term survival and reproduction of animals is becoming increasingly important from a management perspective. This study is therefore of great value for wildlife management and conservation, by providing a much needed basis on which future work can build.”

While this case study focused on minke whales and the effects of whalewatching, the proposed framework will be very valuable." Dr David Lusseau

The research team, led by Dr Fredrik Christiansen, currently a Research Fellow at Murdoch University, Australia, carried out their study by developing a model linking whale behaviour to energy intake (from prey ingested during feeding) and expenditure (from swimming). They also estimated how many times individual minke whales were interacting with whalewatching boats through the feeding season (April to October) when they are in Iceland.

Undisturbed minke whales behaviour was monitored from a lighthouse and compared to behavioural data collected from whalewatching boats during interactions. Minke whales carry individually distinctive marks, allowing the team to estimate how often the same whales were encountered by whalewatching boats throughout the feeding season.

Dr Fredrik Christiansen added: “From this estimate of exposure we could then estimate the total amount of energy the whalewatching interactions would cost individual minke whales throughout the feeding season, which we compared to the energy requirement of an undisturbed whale, to estimate changes in body condition of disturbed whales.

“We estimated minke whale energy requirement by looking at the amount of energy that minke whales deposit into their body reserves (blubber storage) throughout the feeding season using previously published information.

“Finally we used our understanding of  the relationship between the body condition of pregnant females and the size of their foetuses, to find out if the estimated changes in body condition of disturbed whales could end up affecting foetal growth, and hence reproduction.

“Wildlife tourism can be a conservation threat in some circumstances. This study shows that in the case of minke whales in Iceland, it is not likely to be the case. This is not because whalewatching is not disturbing the whales, but because the whales are not disturbed often enough by tourism. This study helps us point to cumulative exposure to disturbances as a key driver of the conservation impact of human disturbances.”