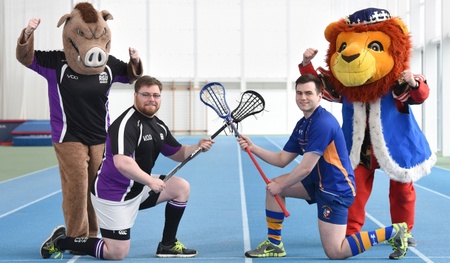 The UK's biggest university sporting event will return to Aberdeen next week, as more than 500 students from the city's two universities go head to head in the 18th annual Granite City Challenge.

With local bragging rights at stake, the teams from the University of Aberdeen and Robert Gordon University will lock horns in 33 events taking place across 12 venues in the city on Wednesday, March 18.

The University of Aberdeen emerged victorious in last year’s event, winning by a six point margin.

A total of 28 sports will be represented in this year’s Granite City Challenge, including Gaelic football, water polo, fencing, curling, and for the first time in the history of the event, lacrosse.

He said: “The Granite City Challenge is a highlight in the sporting calendar of both universities, and we looking forward to resuming the friendly rivalry that makes this such a special event.

The Granite City Challenge is a highlight in the sporting calendar of both universities, and we looking forward to resuming the friendly rivalry that makes this such a special event" Marc McCorkell, Aberdeen University Student Association (AUSA) President for Sport

“There are a huge range of sports represented in this year’s programme, including lacrosse for the first time, and all of our teams have been training hard in preparation for what will be a fantastic day of sporting competition.

“Participants from both universities will be wearing rainbow laces in support of the equality charity Stonewall’s campaign to create an equal and welcoming environment for lesbian, gay and bisexual people who take part in sport, and we are proud to have Stonewall’s backing for this year’s event.”

Vinny O’ Donovan, President for Sport and Physical Activity at RGU, said: “The enthusiasm and excitement that accompanies the Granite City Challenge is testament to the efforts of all those who have made the event such a success since it was first held in 1996.

“Both universities work closely together to deliver what is the biggest university sporting event in the UK, and one that is renowned for its friendly rivalry.

“We are keen for as many people as possible to turn out and support our sporting stars as they go head to head, and help us to make this yet another Granite City Challenge to remember.”