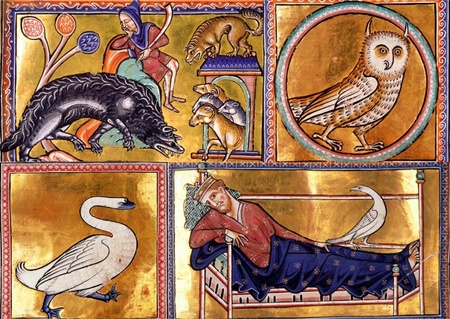 When Thomas Reid gave a colourful bestiary which once graced the library of King Henry VIII to Marischal College, he ensured that 800 years after its creation it would survive to be enjoyed by the scholars of today.

Now current students at the University of Aberdeen have the opportunity to follow in his footsteps by selecting a new donation to the institution – and netting a prize worth a total of £750 – thanks to a philanthropist with a passion for book collecting.

Dr William Zachs has given money to the University’s Aberdeen Humanities Fund to run a prize in memory of Thomas Reid a former regent of Marischal College and the founder of the first public reference library in Scotland.

Reid, who served as Latin secretary to King James VI and I, is said to have been given the Bestiary by his friend Patrick Young, son of the Royal Librarian to the King and bequeathed it to the University’s Marischal College in 1625.

It has remained in the care of the University’s dedicated Special Collections centre and is now revered as one of the best-preserved and most exquisite books to survive from the period.

Dr Zachs, an eminent scholar, has gifted funds to Aberdeen as part of the Scottish Universities Book Collecting Prize Scheme, which seeks to encourage the collection of the printed word in physical form among the students of Scotland’s ancient universities.

Students are invited to submit a catalogue of a collection they own to be in with a chance of winning a prize worth a total of £750.

The collection does not need to be of books - it can be any manifestation of the printed word, from match or concert tickets to film posters or magazines.

The winner will be awarded £500 to spend on an item or items for their own collection, and £250 to spend on a gift of their choice to the University of Aberdeen Library’s Special Collections.

Dr Helen Pierce, lecturer in History of Art and one of the coordinators of the Thomas Reid Book Prize, said the idea was for current students to think about how what they own might be interpreted in the future.

When students are cataloguing their items, we want them to think not only about what the collection means in 2015 but how it might be understood by students of the future." Dr Helen Pierce

She said: “When Thomas Reid bequeathed the Bestiary to Marischal College it was among some 1300 volumes in his collection. He could never have imagined it would become one of the most revered books to survive from the12th century.

“This demonstrates that the value of an item at the time is only part of the story. While the Bestiary was a magnificent example of a medieval encyclopaedia, it’s infinitely more valuable today than it was at the time of its creation for the insights it offers us into life 800 years ago.

“When students are cataloguing their items, we want them to think not only about what the collection means in 2015 but how it might be understood by students of the future.”

Entries must include written list or catalogue of items owned, which can also be illustrated, and a separate statement of the idea of the collection, its scope, intent, and meaning.

Dr Pierce added: “It is particularly important that students think about how their collection could be developed in the future.

“They do not need to have a fully developed collection, it may only be a handful of items, but they need a clear idea of how they would want to add to it.

“Part of the prize is £500 to develop this personal collection and £250 will be awarded for the winning student to spend on a gift to the University which will be housed in Special Collections.

“It is this gift that will provide the long-term legacy to the University and may become the Bestiary of the future.”

Full details of the Thomas Reid Prize and how to enter can be found at http://www.abdn.ac.uk/cass/research/the-thomas-reid-prize-for-book-collecting-380.php Entries must be received by 5pm on Friday May 1.