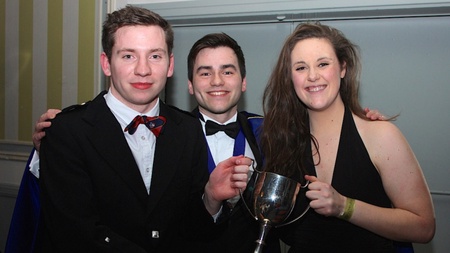 The University of Aberdeen's top student athletes from the 2013/14 seasons were celebrated at the annual Sports Ball last week.

The medals were presented by Vice Principal and Head of the College of Arts and Social Science, Professor Margaret Ross at Aberdeen’s Hilton Treetops Hotel on Thursday February 6.

In total fourteen students were awarded Blues Medals which are given in recognition of a student’s achievement in representing the University of Aberdeen to a high level in their chosen sport.

Also awarded on the night were the coveted Sports Union Trophy Awards. The ‘Blues Bowl’, presented to the Fresher who has made an outstanding contribution to his/her club(s) both on and off the field,   was won by Sidney Tengrove of the Men’s Hockey for contribution and dedication to training and coaching.

The Sandy Morrison Memorial Trophy, presented to an individual who has shown outstanding achievement at their chosen sport during the academic year, was collected by Zoey Clarke of the Athletics Club for her outstanding performance throughout the season and her selection for Team Scotland in the 2014 Commonwealth Games.

The AJM Edwards Award, established in memory of Mr. Freddie Edwards, Honorary President of the Athletic Association from 1976-1983, is one of the most prestigious trophies awarded to an individual and recognises those who have made an outstanding contribution to University sport over a number of years in the form of exceptional active or administrative services to the club.

This year the Blues Committee received 12 nominations with Mr Mel Edwards commenting, “Since my wife Kareen and I put up the Trophy following the death of my father in 1983, in the intervening 30+ years I cannot recall a situation where two nominees who have contributed so much to University sport  have been so evenly matched. These are the type of sportspersons my father admired”. As such, for the first time in its history the award was shared by Michael Thorburn of the Men’s Hockey Club and Megan Burgoyne of the woman’s Lacrosse Club.

Michelle Guarino of the Universities Fencing Club was presented with the Centenary Cup and the joint Aberdeen-RGU University Sport’s Personality of the Year Award for her Gold Medal performance in the Commonwealth Fencing Championships.

The most prestigious award of the night is the ‘Allender Memorial Trophy’ more commonly known as ‘Club of the Year.’ The worthy winner was Aberdeen University Netball Club who excelled in all the criteria of team results, money raising efforts, Club Committee organisation, events organised by the Club and their efforts to encourage new members.

The President for Sport Marc McCorkell said: “The Sports Union Blues Ball gives us a chance to celebrate our top athletes and clubs who have worked hard throughout the past year to achieve success in their chosen sport. We are very proud of all our athletes that continue to put in an outstanding performance and determination from national to international level.”

Ian’s achievements during the last season have been outstanding. His success at the highly contested Rutherford Head competitions demonstrated a high level of performance for Ian, as well as numerous other races, including BUCS rowing regatta, and winning the Intermediate Singles event at the Scottish Rowing Championships. At this event, he finished 2nd in the Lightweight Pairs category resulting in being selected to the Scotland Rowing Team to compete at the Home International Regatta. It was at this Regatta that Ian and his pairs partner finished an impressive 2nd in the Open Pairs event, despite being a lightweight pair.

Megan came to the university with no experience in Lacrosse but has excelled since joining the club. She is described as an inspiration as she has been selected on numerous occasions to represent Scotland at major senior international tournaments with such little experience. Not only is Megan a major success on the field, she also excels off the field too, having been Lacrosse Women’s president for 2 years running, she is viewed as one of the most valuable in the club and is so dedicated and committed to her sport.

Ben’s drive and passion for his sport has been on display since he came to university. He has represented Scotland numerous times in International tournaments, including the World Championships in Denver and a tour in New York most recently. Ben has consistently worked with the university Lacrosse team to develop the sport further within Scotland, including taking on coaching responsibilities. He has also worked in conjunction with RGU to establish and develop their Lacrosse team which is now fully functioning.

Having captained his national team of the Czech Republic, Jozef is more than deserving of Full Blue. He consistently plays Lacrosse at such a high level, including playing at the World Championships held in Denver this year. Jozef is committed to the university club and was President last year. He plays in every match for the university where his passion for Lacrosse comes through on the field.

The Sports Union Blues Ball gives us a chance to celebrate our top athletes and clubs who have worked hard throughout the past year to achieve success in their chosen sport." Marc McCorkell

Eilidh can’t be with us tonight to receive her Full Blue unfortunately. Having played senior club shinty for 8 years, Eilidh played in the University International Representative Squad for 4 years. She is described as a strong and skilful player who has a very positive and supportive influence on her teammates.

John has been described as an outstanding player and has contributed so much to the university shinty team playing at a high standard consistently. He captained the Aberdeen University Senior Team for 2 years and was selected for the Representative Squad for 3 years running. John is unable to attend tonight however we extend our congratulations to him.

Unfortunately Erlend can’t attend this evening so we can’t congratulate him in person for his Full Blue. Erlend was on the 1st’s throughout his entire degree for the university, as well as being on Aberdeen Grammar 1st’s team too. Although studying medicine, he managed to play as many matches as he possibly could, and he was previously awarded Half Blues. Erlend was awarded the prestigious Supporter’s Player of the Year for Aberdeen Grammar and he also played for the Scottish Club International Team.

Having been on the committee for his entire degree, Graeme established himself as a devoted member of the rugby club. As well as representing Aberdeen Grammar during his university career, Graeme was also approached to play for the Scotland Universities squad once it is up and running.

Like Erland, unfortunately Jamie can’t be with us tonight due to work commitments abroad. Jamie represented the 1sts team from his very first year at university and also played for Aberdeen Grammar at the same time. Jamie never missed a match for either team and was regarded as an incredibly dedicated player.

Having been President of the club last year, Sam managed a brilliant season representing both the University Rugby club and Aberdeen Grammar. He started every single game last season and has played for the 1st team for a number of years. His dedication to the club is second to none with this being his 3rd year on the committee, and having been approached to play for the Scotland Universities squad once up and running, he is deserving of Half Blue.

Rob is an integral member of the University Tennis club with an outstanding reputation both on and off court. His most notable of many achievements during the season was winning the Rubislaw Senior Grand Prix singles event, where he encountered many obstacles during the final. Rob managed to overcome these and eventually win the tournament. His track record speaks for itself and he is well deserved of Half Blue.

Danielle has been involved in the sport of trampoline for almost 16 years, and last season was her most successful to date. After winning Scottish Championships, she went on to medal at every single competition she competed in finishing the year with 6 gold, 4 silver and 4 bronze medals. Danielle qualified and represented Scotland at the British Championships where a personal best score ranked her 5th in Britain.

2 years ago Andrew took up the sport of Weightlifting, the Olympic branch of it. Since then he has excelled in all aspects of the sport, including roles within the university club itself as well as competing. Andrew is ranked 1st in Scotland in his weight class, and represented Scotland at the Celtic Championships. Most notably he won the Commonwealth trials in 2014 and narrowly missed out on selection for Glasgow 2014. Andrew was described as a role model for all of those in the university club.

Seb has been described as a very talented lifter, and competes in Powerlifting. Seb had some notable achievements over the season with achieving 4 Scottish age class records. Despite injury he managed to carry on lifting and regularly provides valuable input to the university club, helping out other members.