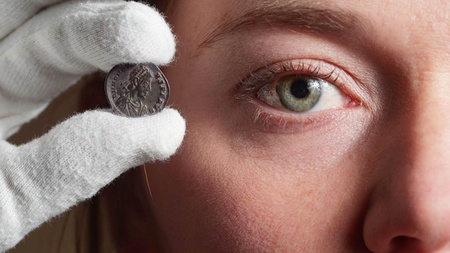 Archaeologists from the University of Aberdeen's Northern Picts project and National Museums Scotland have unearthed a hoard of Late Roman and Pictish silver buried in a field in Aberdeenshire.

The exciting find contains over 100 pieces of hacked-up silver, coins and jewellery. This important discovery is the most northern Late Roman hacksilver hoard to be found in Europe.

“This exciting new find is part of a broader phenomenon of hacksilver hoards which stretch across Europe from the 4th to 6th centuries AD, when the Western Roman Empire was in decline. Silver objects were chopped up into bullion and then used and exchanged as payment, bribes, tribute and reward. People buried their wealth to keep it safe, but many did not return to recover their hoard.

“The new finds include late Roman coins, pieces of late Roman silver vessels, bracelet and brooch fragments and other objects that would have been highly prized objects in their day. Our work in north-east Scotland is increasingly showing that Pictish communities in this area were part of powerful kingdoms in the early medieval period.”

The discovery fits in to a sequence of silver use and re-use over several centuries that can now be studied alongside two other Scottish hacksilver hoards, the purely Late Roman silver from Traprain Law, East Lothian and the Pictish silver from Norrie’s Law, Fife.

These hoards contain a range of interesting material: earlier items from all over the Roman Empire, but also some unique objects and other later objects which have links to Ireland, the near continent and Anglo-Saxon England and give a snapshot of Scotland in Early Medieval Europe.

Silver objects were chopped up into bullion and then used and exchanged as payment, bribes, tribute and reward. People buried their wealth to keep it safe, but many did not return to recover their hoard." Dr Gordon Noble

Elements of the hoard will be on display for the first time at King’s Museum, University of Aberdeen from 20 January to 31 May 2015.

Experts at National Museums Scotland will now embark on a programme of research involving detailed analysis, description and cataloguing of the hoard. The work will be made possible through The Glenmorangie Research Project.

The Glenmorangie Company announced a further three-year sponsorship of National Museums Scotland to support the study and understanding of Early Medieval Scotland (300-900AD). The Glenmorangie Research Project will enable further investigation into the importance of silver, from the very earliest appearance in Scotland during Roman times, to its use in decorating later high status silver objects.  This new find is a significant addition to the story of early Scottish silver. The breadth of National Museums Scotland’s collections, with the support of The Glenmorangie Company, puts National Museums in a unique position to explore how silver, as a new and exotic material, quickly became the most prestigious material for displaying power in Early Medieval Scotland.

Dr Martin Goldberg, Senior Curator, Early Historic collections, National Museums Scotland commented: “We are delighted that The Glenmorangie Company’s continued support will enable us to thoroughly research this exciting new find of Late Roman and Pictish silver, discovered through our work with the University of Aberdeen. It is a hugely important discovery being Europe’s most northerly Late Roman hacksilver hoard, and also containing otherwise unique Pictish silver.

“The research project will enable us to shed new light on the interaction between the Picts and the Late Roman world and reconsider what some older finds in our collection can tell us about Early Medieval Scotland.”

The Project will also fund a new post, The Glenmorangie Research Fellow. National Museums Scotland has appointed Alice Blackwell as the research fellow. Alice, who holds a masters degree in archaeology from the University of Glasgow, will lead the research project, focussing on the magnificent silver of the Late Roman and Early Medieval period.

Director of Corporate Social Responsibility at The Glenmorangie Company, Hamish Torrie said: “We have been enthusiastic partners of National Museums Scotland since 2008 and are delighted to continue to play our part in helping to unravel the mysteries of early Scotland. We wish the Glenmorangie Research Fellow, Alice Blackwell, and National Museums Scotland every success in the next stage of this revealing journey.”