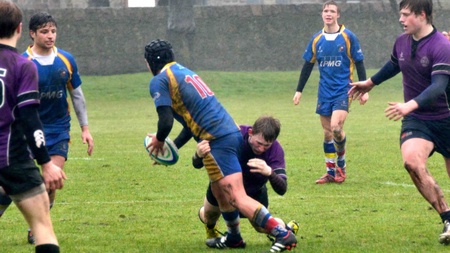 Two of Scotland's biggest university rugby teams will go head-to-head in a match guaranteed to have a 'one-off' atmosphere, with all proceeds going to charity.

Edinburgh University will take on Aberdeen University in the British Universities & Colleges Sport (BUCS) Trophy match under the floodlights at the home of Boroughmuir Rugby Club, Edinburgh.

Edinburgh compete in the British Universities league system, while Aberdeen take part in the Scottish structure, so the BUCS Trophy provides a rare opportunity for the two teams to lock horns.

“It’s not often we get to play Edinburgh in a competitive match these days, so we decided to make it a special event and play the game in the evening under the floodlights at Meggetland, Boroughmuir’s ground, and to charge entry, with all proceeds going to charity,” says Aberdeen club President, Andrew Mustard.

“Normally there might be around 100 spectators at this kind of match, but with it being a 7pm kick off, alumni from both sides are taking the opportunity to attend. We’re taking two busloads of fans down from Aberdeen alone, so we’re hoping for a bumper crowd, and a great atmosphere.

“I think it will be a closely fought game. I suppose Edinburgh are favourites as they compete against some of the bigger English sides week-in, week-out, but we are a strong side and I think we’ll give them a real contest. Whatever happens, I think it will be a great opportunity to showcase Scottish student rugby. With the recent announcement that the University of Aberdeen will be home to one of the SRU’s new BT Sport Academies, it really is an exciting time for rugby in the North-East, and right across Scotland.”

The game will take place on Wednesday October 29 at 7pm, Meggetland Sports Complex. Tickets will be sold on the gate for £5 with all money going towards the Hearts and Balls rugby charity, Macmillan Cancer Support and the Bill McLaren Foundation.