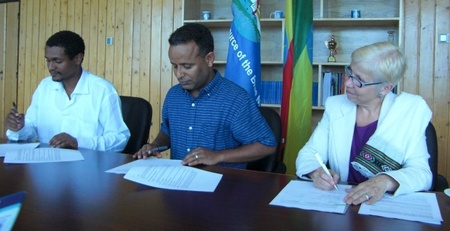 Scotland and Ethiopia may be separated by over 6000 kilometres and by differences in such matters as geography and income, but they share a common goal - investing in medical education.

With less than 3 doctors per 100,000 people in Ethiopia compared with over 280 in Scotland, the scale of investment needed is clearly different too. Yet the crucial role of medical schools is acknowledged by both, as is the importance of exposing the next generation of doctors to health issues beyond their borders - to global health.

This shared vision has now been brought together by the University of Aberdeen through a new partnership with two institutions in the Amhara Region of Ethiopia - Felege Hiwot Referral Hospital and Bahir Dar University Medical School. The partnership has been established initially for the exchange of medical students but will also be the basis for future collaborative research and postgraduate training.

At a signing ceremony in Bahir Dar on Thursday October 2 2014, an agreement was reached between the three partners to enable four to eight fifth year students each year to participate in the exchange. The University of Aberdeen students will undertake their elective projects at Felege Hiwot hospital, and the Bahir Dar students will join appropriate learning in the Suttie Centre at Foresterhill and in the community.

The agreement is historic for each partner - being “a first” for them all. The partnership was sealed with the exchange of quaichs from the University of Aberdeen and a toast with whisky! Representing the University of Aberdeen and lead for the scheme - Professor Wendy Graham said: “Our universities may be different in age - with Aberdeen launched in 1495 and Bahir Dar in 2000 - but they have a modern vision by enabling global learning through this exchange.” The President of Bahir Dar University - Dr Baylie Damtie noted “this is a proud moment for our University as we become the first in Ethiopia to see our students given the opportunity to learn in an historic University like Aberdeen”.

The CEO of Felege Hiwot hospital - Mr Bizuayehu Gashaw - was delighted to see the agreement formalized and said: “We look forward to welcoming the bright and committed students from Aberdeen who will be selected for this exchange.”

This new scheme for the University of Aberdeen will see the first of its students travel to Bahir Dar in September 2015. A similar exchange scheme will also be formalised shortly with the University of The Gambia Medical School and the UK Medical Research Council in The Gambia.