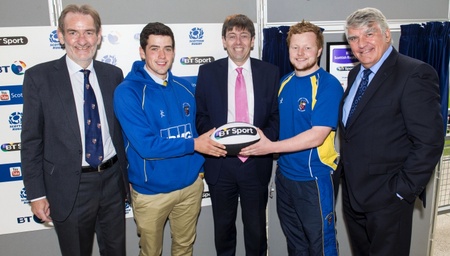 Scottish Rugby this week unveiled the first of at least four BT Sport Academies that will be opened around the country to nurture the best young Scottish talent to become the stars of tomorrow.

“The Academies are the cornerstone of our determination to create a new era for Scottish Rugby,” declared chief executive Mark Dodson at the opening of the Caledonia Academy at the University of Aberdeen’s Hillhead campus.

"Alongside our policy initiatives on clubs, schools, coaching pathways and the women’s game they signal our resolve to build a strong and dynamic future for our sport, a future based on our schools, clubs and academies beginning to thrive and create a pipeline of home-bred talent to feed both the elite and grassroots end of our sport.

“I’ve spoken before about the transformational BT sponsorship agreement. As part of the deal, and linked to BT Sport, we will invest £1.2million per year on creating, resourcing and operating the four academies.

“I must also thank the University of Aberdeen for their foresight to support the BT Sport Academy here in the Granite City and the manner in which our partnership has been forged and is developing.”

Professor Sir Ian Diamond, Principal and Vice-Chancellor of the University of Aberdeen, said: “Dedication to excellence and the quality of student experience is what this university is all about.

“Providing opportunities to develop and excel at their chosen sport is an important element of the experience we offer our students.

“This partnership with Scottish Rugby is an exciting and inspiring addition to our portfolio of sporting opportunity, adding to the wonderful Aberdeen Sports Village and Aquatics Centre, and confirming our commitment to nurturing talent and supporting ambition.

I'm delighted that this first BT Sport Scottish Rugby Academy is here at the University of Aberdeen.”

SRU President Ian Rankin, who performed the official opening ceremony today with Brendan Dick, Director BT Scotland, said: “Having had first-hand knowledge and experience of the contribution Caledonian rugby has made to Scottish Rugby over the years as a player and a coach, I am delighted to witness the opening of the very first of our new generation of BT Sport Academies here in Aberdeen.

Providing opportunities to develop and excel at their chosen sport is an important element of the experience we offer our students." Professor Sir Ian Diamond

“I am sure it will prove to be the launch-pad for the next generation of players from the North of Scotland challenging to pull on a Scotland jersey.”

The Academies will be open to the best talent, male and female, eventually from the age of 14 onwards. The initial focus will be on players within the 16, 18 and 20-year-old age-groups and the top tier of the Academy, stage three, will replace the current Elite Development Player strand within the pro-clubs.

The Academies will not only concentrate on the best players of the next generation.  They will also seek to develop the next tranche of coaches and seek to better bridge the gap between the club and professional game.

Stephen Gemmell, Scottish Rugby’s Acting Head of Academy, explained how playing recruitment would work: “On the male side we will be looking for players who are most likely to play professional rugby or higher. On the female side, we are working with Sheila Begbie, our Head of Women’s and Girls’ Rugby and the Scotland Women’s national coaches, to put in place the best model that will work for a revitalised women’s game."

On the staffing side, each Academy will have a manager and appropriate coaching and medical staff.  The Caledonia Academy manager will be announced shortly.

BT Scotland director Brendan Dick said: “It’s great to be here in Aberdeen today for the launch of the exciting BT Sport Scottish Rugby Academy, one of four we’re sponsoring across the country to nurture and grow the nation’s grassroots talent.

“BT is at the heart of Scotland, as a communications provider, as a business and an employer in our communities.

"We’ve a history of supporting rugby in Scotland which we’ve added to with the naming rights to BT Murrayfield and the sponsorship of Scotland’s domestic league and cup competitions, Scotland’s 7s side and the nation’s two professional teams in Glasgow and Edinburgh.

“Rugby is also at the heart of BT Sport – BT Sport has exclusive live rights to the Aviva Premiership. And later this month we have the mouth-watering prospect of live and exclusive matches from the new European Rugby Champions Cup.”