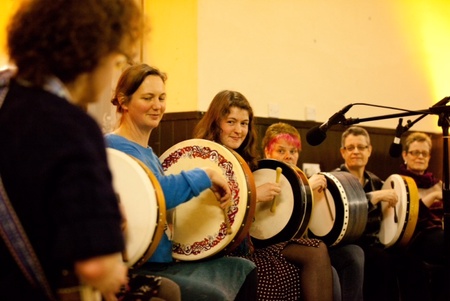 People in Aberdeen and the north east are being asked to dust down their fiddles and break out their ceilidh boots as a new programme of weekly adult evening classes is launched.

The University of Aberdeen is proud to announce a new partnership with Scottish Culture & Traditions Association (SC&T)  which will see traditional music classes being offered at the University on various evenings every week.

SC&T which has been running the popular classes in Aberdeen for the past 17 years will be moving its operation to the University with classes starting on 22 September.  Nearly 30 different classes are on offer ranging from fiddle, whistle, banjo and clarsach to Scots song, ceilidh dancing, guitar, ukulele and many more.

The new partnership sees SC&T join forces with the University’s Music at Aberdeen team in the School of Education and The Elphinstone Institute to run nightly classes which will be held in the MacRobert Building on the corner of King Street and St Machar Drive.

SC&T promotes the learning of music, song and dance in the Scottish tradition and the classes on offer will appeal to all in the North-east whether novices or experienced players.

This is a tremendous opportunity for both the University and SC&T in joining together like this, it bring together two powerhouses of learning and teaching in Music in the region which will strengthen its cultural profile as well as growing into something really quite special." Professor Pete Stollery

SC&T Chair Richard Ward says  “We are now in our 17th year of classes and SC&T has  taught over a 1,500 participants over that time. The classes are taught by some of Scotland’s finest traditional musicians, singers and dancers and have been hugely popular over the years.”

Professor Pete Stollery, Head of Music at the University of Aberdeen says “This is a tremendous opportunity for both the University and SC&T in joining together like this, it bring together two powerhouses of learning and teaching in Music in the region which will strengthen its cultural profile as well as growing into something really quite special.

“If you’ve always wanted to learn an instrument, there is a variety of beginner classes available or advanced musicians can hone their techniques or enhance their repertoire of traditional tunes. The classes start on the 22 September and run for the full term over various evenings. Enrolment is now open.”

Details of the classes and tutors can be found on www.scottishculture.org

Scottish Culture & Traditions Association (SC&T) was established in April 1997 in Aberdeen to provide participative learning experiences in Scottish culture and traditions.  The Association became a company limited by guarantee in May 2002. SC&T aims to promote Scottish music, dance, arts, crafts, literature and appreciation of our heritage and to encourage social interaction of people with a common interest. Scottish Charity No.SCO 27559  www.scottishculture.org