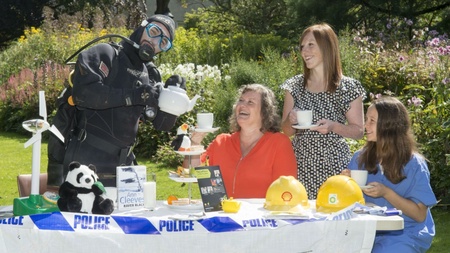 A tea party with a difference was held at the Cruickshank Botanical Gardens to launch Aberdeen's annual TechFest In September festival, which returns to the city on September 6.

The ‘TechFeast’ represented the huge variety of shows, workshops and exhibitions which will take place during the festival, which this year celebrates its 21st birthday.

With a wide range of activities for all ages, the annual festival of Science, Technology, Engineering and Mathematics (STEM), is set to attract more than 20,000 visitors between September 6 and 26.

One of the aims of TechFest In September, which is supported by joint principal sponsors BP and Shell, and hosted and supported by the University of Aberdeen, is to engage young people in the four main STEM subjects and encourage them to go on to follow a career which utilises these skills by demonstrating that they are both fun and relevant in day to day life.

A group of youngsters got together for the launch, with everything from telescopes, bubbles and puffins to hungry caterpillars, divers and doctors featuring in the tea party.

Booking opens this week for the new public programme, which has something for everyone - from loud and energetic shows aimed at children to thought-provoking lectures for adults.

Sarah Chew, managing director of TechFest, said: “This year’s TechFest In September has more than 100 public events that are all designed to get people interested in and excited about Science, Technology, Engineering and Maths.

“We have introduced a number of new events this year and the public programme offers something for all different age groups and audiences, from the fun and light-hearted to high level presentations on topical subjects such as renewable energy and climate change.

She added: “We are indebted to the assistance we receive from all our sponsors and supporters, in particular our joint principal sponsors Shell and BP, whose ongoing backing helps us to continue to educate, inspire and entertain.”

Dr Kevin Fong, who presented Channel 4’s Extreme A&E and regularly features on Horizons, will host the opening event on Saturday, September 6, when he will discuss human exploration and survival in the most extreme environments.

Other key highlights include an evening with The Gadget Show’s technology geek, Jason Bradbury; a behind the scenes look into the science behind Brewdog; a fun-filled experiment extravaganza with TechFest favourite, Dr Bunhead; and a night of murder mystery with award-winning Shetland and Vera author Ann Cleeves and local forensics expert, Dr James Grieve.

The festival will get underway with a fun filled Activity Weekend, with 35 hands-on workshops and demonstrations at the Beach Ballroom and Beach Leisure Centre on Saturday and Sunday, September 13 and 14, sponsored by Marathon Oil.

The Discovery Series, sponsored by Nexen, offers a wide range of fascinating presentations, while the University of Aberdeen is also hosting a series of events over the three weeks.

A new sponsor on board for the 2014 festival is Statoil, which is supporting the Cerebral Science series and includes the Heroes of Tomorrow event where youngsters will present to their peers on a STEM topic they are passionate about.

For the sponsors, the festival offers the opportunity to engage with young people who may help to fill the industry’s skills gap in future years.

Glen Cayley, Upstream Director U.K. & Ireland - Shell U.K. Limited, said: “Shell is very pleased to return as Joint Principal Funder of TechFest In September 2014, the North-east’s annual festival of science, technology, engineering and mathematics (STEM), in what is bound to be another incredible year of inspiring young people and the wider public to embrace STEM-related careers.

“Events such as Techfest, which aim to encourage enthusiasm for the fascinating world of STEM subjects, are so important in inspiring the next generation of young scientists and engineers. We are delighted to be a part of such an exciting event which we consider to be a real asset to Aberdeen and the North-east.

“It is great to see events such as Techfest engage children of all ages in fun and educational STEM-based activities which help to increase their knowledge and interest in related industries at the appropriate time in the future.  The energy industry holds many exciting challenges and opportunity for this next generation of engineers and scientists.

“By supporting TechFest-SetPoint we are not only investing in the future skills of our children but also investing in our own future as the next generation of scientists and engineers are inspired by what they see at the festival.”

Lynne Staples-Scott, BP’s External Affairs Manager, said: "TechFest In September is an excellent example of how the public, private and voluntary sector can work together to inspire the next generation of scientists who will be so vital for our future success. This year’s programme is better than ever and offers something for everyone whatever their age or interest.”

As well as the public programme, around 10,000 pupils are also signed up to attend a host of science, engineering and mathematics-themed TechFest events for schools.