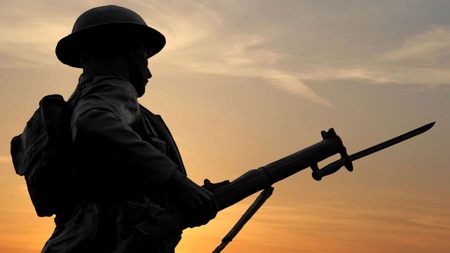 The University of Aberdeen will help mark today's (August 4) centenary of the outbreak of World War I with the launch of a new online educational resource which is free and open to all.

Nutrition and War is the name of the programme which gives an insight to the importance of nutrition to the individual soldier, to armies, and to entire civilian populations during times of conflict

The course opens in the early 19th Century with the Peninsular War and examines subsequent conflicts throughout the 19th Century, ending with a study of the Great War, which began 100 years ago, on August 4, 1914.

Nutrition and War outlines just how important food provision was in determining the outcomes of war, and how it was also used as a weapon in war, when attempts were made to deprive not just soldiers, but whole countries, of essential foodstuffs.  It uses videos, lectures, imagery, poems and music.

Professor Steve Heys, Professor of Surgical Oncology at the University of Aberdeen, and Tom Scotland, retired orthopaedic surgeon, have developed the programme, aimed at anyone with an interest in wartime conflict, and in understanding just how important food was, and is, in warfare.

Both men have an extensive knowledge of the Great War and have published three books about aspects of military medicine and surgery through these times, in particular the Great War, where the foundations of modern day surgical practice were laid.

It's particularly pertinent that the University is offering Nutrition and War as an educational resource to the public because of the University's long standing support of the armed forces. " Tom Scotland

“Aberdeen was the only University in Great Britain to have its own company of soldiers called ‘U Company’, the 4th Battalion of the Gordon Highlanders. They were involved in the Great War. Sadly U Company was wiped out on 25th September 1915 when they were involved in an action in the Ypres Salient in Belgium, which was a diversion for the main battle taking place at Loos in France where more than 36,000 Scottish soldiers were  involved on that terrible day."

Professor Heys, whose bagpipe playing gives an evocative backdrop to the course, added: “Lord Boyd Orr, founding director of the University’s Rowett Institute of Nutrition and Health, was the first scientist to show a link between poverty, poor diet and poor health. He was decorated for his Great War service where he saw at first hand the poor health and physique of many of the army conscripts. His research also helped formulate food rationing during World War II, and of course, the Rowett is renowned internationally for its nutrition research it conducts today.”

As well providing a study  on wartime nutrition, Professor Heys and Mr Scotland, say Nutrition and War  is a tribute to all those who made the ultimate sacrifice in the ‘war to end all wars’, and also to the many who survived and whose lives were irrevocably damaged by the war.

Nutrition and War has taken around a year to produce and has been designed for the general public. It is free and available to all.