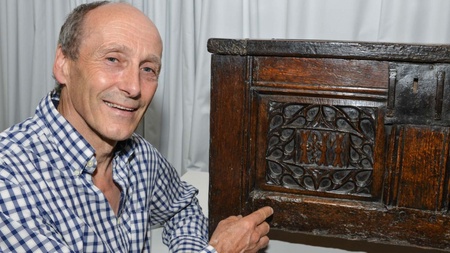 A 500-year-old oak chest has been identified as a wedding gift commissioned for one of the most pivotal moments in Scottish/English history.

Five centuries after it was created, the small coffer was acquired by an amateur collector of early furniture, Aidan Harrison. His initial research suggested it could be the marriage chest of Scottish King, James IV and Margaret Tudor, the daughter of the English King Henry VII.

The Marriage of the ‘Thistle and the Rose' took place at Holyrood on 8 August 1503 and brought temporary peace between Scotland and England.

Leading art historian Professor Jane Geddes, from the University of Aberdeen, has now confirmed its provenance after Aidan consulted her regarding similar styles of wood carving found in Aberdeen.

She said: “He came to me and said ‘I think I’ve got something rather exciting here’ and he most certainly did.

“The carving and woodwork strongly point towards its creation for the wedding of King James IV and Margaret.

“The marriage was hugely significant, joining the ruling families of Scotland and England - the Stewarts and the Tudors.

“As part of the celebration, an exquisite Book of Hours was commissioned from a Flemish workshop and we hold a facsimile copy of this at Aberdeen.

“The similarities between the carvings on the chest and the illuminations in the Book of Hours are striking. Three illuminated documents relating to the royal wedding all show the IM monogram (James and Margaret) tied together with a similar love knot, just as it is carved on the chest.  This was such a trademark for the union that even the floor tiles for Linlithgow Palace were made with the same design. James gave the palace to his bride for a wedding present. The tassels on the knot are shaped as thistles, a reminder of the king and his country.

The carving and woodwork strongly point towards its creation for the wedding of King James IV and Margaret." Professor Jane Geddes

“A wooden chest was one of the most important items of medieval furniture, because aristocratic families spent so much time travelling with pack-horses all around the country to their various homes. All the royal bride’s personal items would be kept in a chest like this. It is remarkable that it has survived for so long before its significance was fully appreciated.”

The marriage chest is significant for Aberdeen – where it was displayed at the annual conference of the British Archaeological Association, held at the University of Aberdeen on Wednesday July 23.

The University’s founder, Bishop Elphinstone, led the diplomacy which resulted in the marriage, while the chapel furnishings were carved by the royal carpenter John Fendour, and his workshop.

Professor Geddes added: “Both the chest and King’s College Chapel stalls were made at the same time. Thistles and roses are found all over the stalls, also celebrating this marriage. The coats of arms of James IV and Margaret are the two principal carvings on the west front of the chapel.

“Were it not for the work of Bishop Elphinstone in brokering the marriage, the houses of Tudor and Stewart may never have come together.

“Elphinstone wanted to create a lasting peace between Scotland and England and although this wasn’t to happen, it was their great-grandson King James VI of Scotland who eventually took the English throne as James I of England when Queen Elizabeth died. The two nations have shared a monarch ever since.”

The marriage chest will be on display in the Craig Suite of the Sir Duncan Rice Library at the University of Aberdeen, together with the facsimile of the Book of Hours and it is hoped it will soon go on public display in Scotland.

“To see the two together brings you very close to that moment, both intimate and extremely public, when the marriage took place and the plucky 14-year old queen began her royal journeys across Scotland.” added Professor Geddes. “Queen Margaret would have treasured her private prayer book and tucked her personal possessions into the box.”