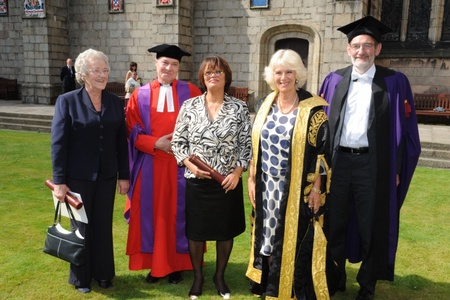 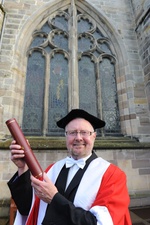 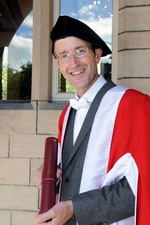 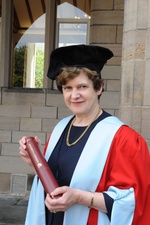 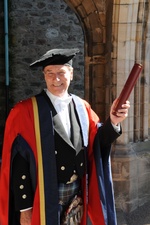 A renowned Scottish ecologist, mountaineer and authority on the Cairngorms; two acclaimed authors; and a leading north-east entrepreneur are among those being honoured at the University of Aberdeen's summer graduations.

Dr Adam Watson, originally from Turriff in Aberdeenshire will receive an honorary Doctorate in Science (DSc) degree on Monday July 7 in recognition of his contribution to nature conservation. Dr Watson is a leading authority on the Cairngorms and has published 35 books and more than 300 peer-reviewed papers.

It will be the fourth time Dr Watson has graduated from the University of Aberdeen – having received a BSc with First Class Honours in 1952, a PhD in 1956, and a DSc in 1967.

On Monday, an Honorary Doctorate of Letters will also be presented to award-winning writer, literary critic and literary award judge Robert Macfarlane.  An author with serious literary intent, he has gained wide public readership and recognition for his books encompassing travel, nature, literature or the environment.

The same award will also be presented to highly-acclaimed Scottish author Christopher Rush who has written in a variety of genres as poet, novelist, memoirist, biographer, screenwriter and editor. His 1984 book, A Twelvemonth and a Day, was listed as “one of the 100 greatest Scottish books ever” by The List magazine.

The degree of Doctor Honoris Causa (DHC) will be conferred on Michael Loggie, Chief Executive of The Saltire Energy Group, an outstanding Scottish businessman and leading North-east entrepreneur with a strong belief in corporate responsibility and philanthropy. He founded Saltire Energy in 1986 and has since grown it into a highly successful Group of three subsidiaries, with seven bases located across the world. He is also a prominent figure in the North-east tourism and hospitality sector and in 2014, Mr Loggie was made a Burgess of Guild for Aberdeen City and an Honorary Patron of Befriend a Child, as a result of his support of the charity.

The University of Aberdeen is proud to recognise the achievements of such distinguished and talented individuals. We welcome them all warmly to the University family as Honorary Graduates." Professor Sir Ian Diamond

Others being honoured during the Summer ceremonies, which run from July 7 to 11, include Dr Alice Prochaska, a distinguished curator, archivist, and library administrator who has been Principal of Somerville College, Oxford since 2010, who will receive an honorary Doctor of Laws (LLD) degree; Professor Witold Zatoński, Director and Professor in the Division of Cancer Epidemiology & Prevention at the Cancer Center & Institute of Oncology in Warsaw, and Professor Anna Glasier, an eminent researcher and practitioner in the field of contraception and sexual health, who will both be awarded Honorary Doctor of Science degrees.

Distinguished Scottish theologian, Reverend Professor David Fergusson, Professor of Divinity and Principal of New College, University of Edinburgh, and Reverend Professor Clifford J Green an eminent scholar of international standing who has played a leading role, over four decades, in preserving the legacy of the courageous theologian and anti-Nazi resistance activist Dietrich Bonhoeffer, will be given the degree Doctor of Divinity.

A Doctor of Laws (LLD) will be awarded posthumously to Professor Russel Botman, who died unexpectedly on Friday June 27, 2014. Professor Botman was a greatly respected Rector and Vice-Chancellor of Stellenbosch University (SU), one of South Africa’s leading higher-education institutions. Before his appointment in 2007, he was Vice-Rector: Teaching. He also served as a Director of Higher Education South Africa and Senior Vice-President of the Association of African Universities.

“These exceptional individuals have attained distinction and acclaim in their respective fields and provide a strong example for our graduands of the success which can be achieved through dedication and passion.”