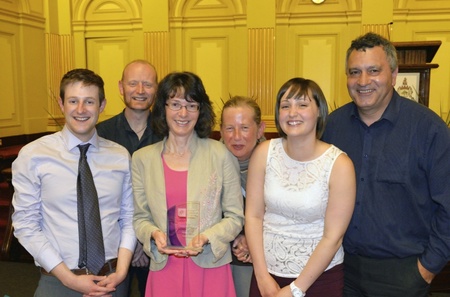 The first cohort of interns taking part in a collaborative project which aims to increase the number of people with learning disabilities in employment graduated from the programme at the University of Aberdeen today (Thursday).

Project SEARCH is a collaborative project between the University, Aberdeen-based charity Inspire and North East Scotland College. The three Aberdeen partners were selected to carry out the project by the Scottish Consortium for Learning Disability (SCLD) which oversees the initiative in Scotland.  The programme is also supported by Aberdeen City Council and Aberdeenshire Council who have funded some of the programme’s resources.

The one-year programme saw 12 Project SEARCH Interns, who are all registered students with North East Scotland College, spending a month in a classroom environment before embarking on a rotation of 3 work placements in various roles and departments within the University.

Following the completion of the course, 10 of the 12 interns have already secured employment, with two of the interns being appointed to posts within the University.

This award is testament to the hard work and dedication of everyone who has been involved in establishing and taking this inspirational project forward and I am thrilled that this has now been recognised at a national level." Professor Neva Haites

As well as the graduation ceremony, the Project SEARCH Aberdeen team is also celebrating after receiving an award at the recent Project SEARCH European Conference, at which it was named the foremost up and coming new site of 2013/14.

Professor Neva Haites said: “This award is testament to the hard work and dedication of everyone who has been involved in establishing and taking this inspirational project forward and I am thrilled that this has now been recognised at a national level. I am personally very proud to have been involved in this initiative and congratulate everyone involved in the project on the tremendous achievements they have made.  I hope that our graduating Interns will be able to share their enthusiasm and successes in both their personal and working lives and continue to be the fantastic Ambassadors for Project SEARCH that they have been within the University to date. I look forward to welcoming our second group of Interns in September”.

Kieran Robertson, one of the Project SEARCH interns, added: "I have really enjoyed Project SEARCH, it has boosted my confidence to find employment in the future.  I have made lots of new work mates at the University and have learnt how to work as part of a team.  I am very positive that I will find a job, and have the skills to do so.  I would definitely recommend Project SEARCH."

Project Coordinator, Kelly Clark from Inspire, added:"This has been a really successful year for the Project SEARCH team at the University of Aberdeen.  We have had a fantastic group of young people complete the programme and many have gone on to secure full time positions which is a testament to their achievements.  Both the team and the interns have truly felt part of the University and they have been supported to grow and develop by everyone here.  We are really proud of our programme and honoured to receive recognition from the Project SEARCH European family.  I am looking forward to another exciting year in 2014/2015."