Do you know your Broken Belted from your Gypsy Cuckoo? Bumblebee survey calls for more volunteers
03 July 2014 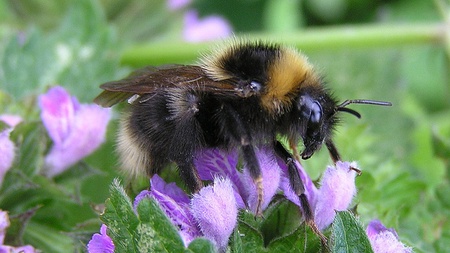 Bumblebee enthusiasts are swarming to take part in the most high-tech survey of the species ever carried out in the UK.

Photos of bumblebees are being identified using a ground-breaking online ‘crowdsourcing’ technique - where a positive ID is reached when several members of the public allocate it to the same species.

More than 9,000 photos have already been submitted as part of the BeeWatch project which is coordinated by the University of Aberdeen’s dot.rural team and the Bumblebee Conservation Trust (BBCT).

Those behind the survey are calling for more volunteers to send in and identify photos and have made it easier than ever before with the launch of a new online training tool which teaches novices how to identify bumblebees.

“At the moment, only about five percent of our bumblebee submissions are identified by ‘crowdsourcing’ – that is the collective opinion of several volunteers,” explains Dr René van der Wal, project leader at the University of Aberdeen. “In principle almost half could be identified by crowdsourcing, and that would allow experts to concentrate only on the submissions that prove too hard for most volunteers to identify. To achieve this we need the public to help by identifying bumblebee images submitted from people across the UK.”

The team stress that only with help from the public can experts handle the volume of submitted photographs. With the new easy online training tool now available, more volunteers can gain confidence in bumblebee identification, encouraging them to take part in valuable crowdsourcing.

“This will allow far more pictures of bumblebees to be identified, and thus create a far clearer picture of the distribution of bumblebee populations in the UK,” added Dr van der Wal.

The BeeWatch project was prompted by the decline of the country’s bumblebee species as a result of habitat loss and changes in agricultural practices. Bumblebees are crucial to the country’s ecosystems as some of nature’s most important pollinators of both crops and wildflowers.

The scheme aims to enlist members of the public in a bid to address the lack of information about which bumblebee species occur where and how this may be changing over time.

To have crowdsourcing as an operational part of a monitoring programme is a world first." Dr Advaith Siddharthan

Anyone can register to help identify the bumblebees by signing up to the BeeWatch website.

A bumblebee is officially identified once a sufficient number of volunteers have identified it as the same species. If there is disagreement, the image is checked by a bumblebee expert. So far this process has been extremely accurate.

Users who submit a photograph receive automated feedback once their bumblebee has been categorised, along with additional information about the species in the wider context of the UK, such as how common it is and where it is usually found. They are also encouraged to try their hand at identifying other users’ submissions.

“To have crowdsourcing as an operational part of a monitoring programme is a world first,” says Dr Advaith Siddharthan, from the University’s school of Computing Science.  “BeeWatch is, we think, unique in terms of having a statistical model for putting together IDs by different members of the public and estimating the likelihood of their consensus being correct.”

The survey has also revealed information that supports a recent study by the University of London regarding the rise in populations of the Tree bumblebee.  A species unseen in the British Isles until 2001, the BeeWatch survey has confirmed it is now one of the most common in the country.

Dr Richard Comont, data monitoring officer for BBCT adds: “The Tree bumblebee came to UK shores from France in 2001, and our BeeWatch results so far show that it’s now the third most commonly-seen species of bumblebee in the country.

“At the moment the population is greatest in the south but the first sightings from Scotland have started to come in over the last year or so.

“Whilst some have voiced concerns that the rise of the Tree bumblebee could lead to the demise of other species, our survey has given no indication that their spread so far has been detrimental to other bumblebee species.”

dot.rural is the RCUK Digital Economy Hub, based at the University of Aberdeen, focusing on the rural digital economy. Rural areas have specific characteristics that create challenges around issues such as quality of life and wealth creation. These include: small, often dispersed populations; narrow and uneven channels of information flow; rapid change in population structures and economic activity bases; and restricted access to digital infrastructure. We believe that rural areas of the UK can, through the user-led application of digital technology, be more economically, socially and environmentally sustainable. Our aim is to harness the Hub's expertise with a range of partners to realise this ambition. Our activities are organised around four rural challenges: Healthcare, Accessibility and Mobilities, Conservation of Natural Resources, Enterprise & Culture. For more information on dot.rural visit www.dotrural.ac.uk, email dotrural@abdn.ac.uk or phone +44 (0) 1224 274065.

The Bumblebee Conservation Trust was established because of serious concerns about the 'plight of the bumblebee'. In the last 80 years our bumblebee populations have crashed. Two species have become nationally extinct and several others have declined dramatically.

We are working toward four main aims: