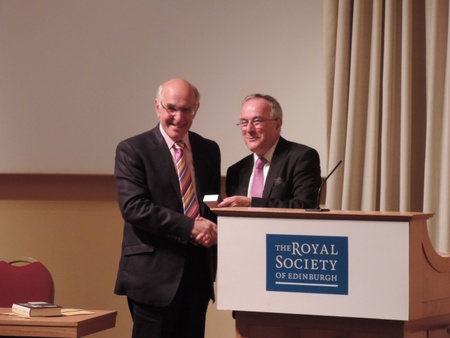 The Royal Society of Edinburgh presented the Sir Walter Scott Medal to David Hewitt, Regius Chalmers Professor of English Literature at the University of Aberdeen, at a special event last month.

Professor Hewitt received his medal for his outstanding contribution to Scottish Literature for his work on The Edinburgh Edition of the Waverley Novels at a ceremony at the Royal Society of Edinburgh on Monday, June 9.

Planning for the series of 30 volumes, which provides a revised text much closer to what Scott himself wrote, began in 1984; the first books appeared in 1993 and the last two in 2012.

The piece of academic work was a huge undertaking and involved a team of 16 academics.

As well as receiving the senior prize at the event, Professor Hewitt also presented a lecture: A la Recherche du Temps Perdu: The Past in Literature from Scott to Proust, which paid homage to Walter Scott on the bicentenary of the publication of the first historical novel, Waverley. The lecture also considered the different kinds of past, and the different approaches to finding and reliving the past in Scott and other writers such as William Wordsworth, John Ruskin and Marcel Proust.

Professor Hewitt said: “It is overwhelming to receive an honour such as this and obviously it is wonderful to know that the volumes have been so well received.

The effort and dedication that is required to undertake a project such as The Waverley Novels is immense, and as a result, David and his colleagues have produced a truly wonderful 30 volume series of books." Professor Sir Ian Diamond

“Along the way, we faced many challenges and the occasional frustrating moments – it would be impossible not to when we had to gather so many of the original manuscripts from across the world. However when you see a project like this come to fruition it really does give one a tremendous sense of pride.

“I worked alongside a team of truly fantastic scholars in order to produce the Edinburgh Edition of the Waverly Novels and receiving the Sir Walter Scott medal reflects upon the hard work carried out by each and every one of my colleagues.”

Principal and Vice Chancellor, Professor Sir Ian Diamond said: “I am thrilled that the RSE has recognised Professor Hewitt with this richly deserved award.

“The effort and dedication that is required to undertake a project such as The Waverley Novels is immense, and as a result, David and his colleagues have produced a truly wonderful 30 volume series of books.”

Professor Alison Lumsden added: “Professor Hewitt’s award is very well deserved. The Edinburgh Edition of the Waverley Novels is a significant achievement and has done much to re-vitalise interest in Walter Scott. While the edition was a collaborative effort and  much of the joy of working on it came from being part of a dedicated team, it would never have been completed without the vision, commitment, energy and enthusiasm that David brought to it.”

Professor David Hewitt taught at the University of Aberdeen for 44 years and received his award from former student Professor Graham Caie, Vice-President of the RSE.