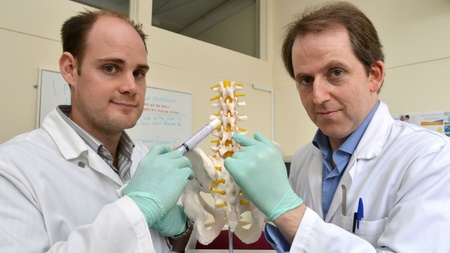 Scientists developing a material that mimics bone have won a major venture prize that takes their pioneering product a step closer to being used in patients.

The SIRAKOSS MaxSi™ Graft technology which produces purely synthetic material, with no variability in performance, has the potential to treat many thousands of patients who need spinal fusion surgery for back pain, or repairs for traumatic bone injuries.

This innovation has won SIRAKOSS - an innovative medical device company based in Edinburgh and Aberdeen and spun out of the University of Aberdeen - the £25,000 Venture Prize from The Worshipful Company of Armourers and Brasiers.

Professor Iain Gibson, a University biomaterials chemist and principal investigator of the SIRAKOSS MaxSi™ Graft technology, said: “SIRAKOSS is delighted to be recognised in this way by the Armourers and Brasiers' Company which is a prominent supporter of materials science research and commercialisation in the UK.

“Funding from the prize will help bring our unique synthetic bone material closer to market. This could help the many hundreds of thousands of people who need bone grafts or bone repairs following the type of fractures suffered in road accidents which can be difficult to heal.”

Professor Gibson and the SIRAKOSS team have spent eight years developing and refining the MaxSi™ Graft technology which has a unique chemical composition and scaffold structure for achieving bone repair and fusion.

We were hugely impressed with the SIRAKOSS entry and their approach which offers surgeons a materials science alternative to pharmacological products for obtaining rapid bone repair and fusion." Professor Bill Bonfield

“We are taking a different approach to the synthesis of our material which we believe will make it more successful than other artificial bone products currently available to surgeons. Our product contains no human or animal proteins which removes the risk of potential batch-to-batch variability in performance. Also, because it’s made in the lab, it could be available in endless supply.

“Currently, patients who need bone grafts will frequently have bone grafted from elsewhere in their body or from bone harvested from a cadaver. Both of these types of grafts have their issues,” explained Professor Gibson.

“You may have an elderly patient going into hospital for an operation on their back which uses bone taken from their pelvis – a process called autografting. The patient then has two operations to recover from, which is far from ideal. Also more than 30% of patients suffer long term chronic pain at the previously healthy site where the bone was harvested.

“Cadaver bone also has its problems – it has the potential for disease transmission and is of variable quality and efficacy.”

Professor Bill Bonfield, chairman of the Armourers & Brasiers Venture Prize judging panel said: “We were hugely impressed with the SIRAKOSS entry and their approach which offers surgeons a materials science alternative to pharmacological products for obtaining rapid bone repair and fusion. This has the potential to benefit thousands of people each year and it also fits well with our aim to encourage innovative scientific entrepreneurship in the UK and to provide funding, which is often difficult to source, to bring new materials science research to market.”

Brian Butchart, CEO of SIRAKOSS added: “In a very competitive field we are delighted to have won this award which recognises the outstanding material science in the development of our synthetic bone graft and the clearly defined commercial opportunity. Receiving this recognition from the Worshipful Company of Armourers & Brasiers, which with its origins dating back to 1322, is a huge endorsement of the development efforts undertaken by the team and in particular Professor Iain Gibson and Jordan Conway.

The Prize will progress efforts in achieving regulatory approval for clinical use. The aim is to MaxSi™ Graft technology approved for use in patients in two years’ time.”

The Worshipful Company of Armourers and Brasiers:

The Armourers & Brasiers Company is a leading supporter of materials science education and research in the UK.  Its Venture Prize is aimed at helping scientists commercialise the early stage research and the exploitation of new and exciting ideas. The Company also seeks to encourage education in science from primary to postdoctoral levels supporting schools and universities throughout the UK. See http://www.armourershall.co.uk/index.php for further information.

SIRAKOSS was formed to October 2010 and following commercial validation the technology was spun out of the University of Aberdeen in May 2011. The company successfully complete proof of concept on the second product range in 2012 and following Seed Fund investment in Q1 2013 is currently seeking Series-A investment for regulatory approval and commercialisation in a $2.5bn global market. The technology is also attracting interest from a number of global medical device companies.

Worldwide, surgeons perform thousands of bone fusion procedures every single day, in each case they are seeking to correct a defect, reduce pain and improve the quality of life for the patient.