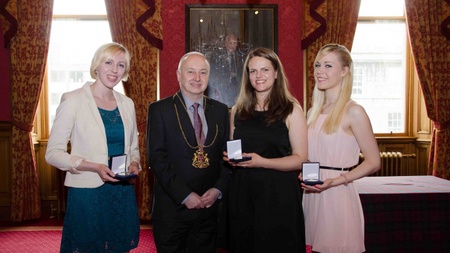 A student who was financially supported by her soldier brother's army wages is among those to be honoured by the University of Aberdeen with a special award.

Alexandra Gherghinis, Rebecca Walker and Natasha Ross are this year’s winners of the University’s Quincentenary Prize.

The students were each presented with a £1000 cash prize and medal in honour of their achievements by the Lord Provost of Aberdeen, George Adam, at a ceremony held at the Aberdeen City Council Town House.

Hispanic Studies student Alexandra, originally from Romania, had to rely on financial support from her brother, an army officer in her native country, to pay for food and rent whilst she was studying. He gave up most of his wage for a six month tour in Afghanistan while his sister looked for a part time job to support herself.

Her nomination for the award commended her strong academic performance, stating that she displayed “the critical thinking and intellectual maturity of a postgraduate student”.

Natasha Ross from Aberdeen was another student to be honoured. The fourth year Accountancy and Property student.

Nominated by Prof Clare Roberts and Dr Rainer Schulz, Natasha’s academic achievements since joining the University have been exemplary and she is strongly tipped to graduate with a First Class degree this summer.

During her studies she has been awarded four student prizes, two from each discipline, and also received the Chap Construction Scholarship in property management in 2012.

Natasha was also praised for her extra-curricular activities. She is currently the elected Secretary of the University’s Real Estate Society and has had the same role in the Business Enterprise Society in previous years. She also took part in the 2013 international Cornell Real Estate competition.

Last, but not least, Rebecca Walker received the prize, after being nominated for outstanding achievement in her Masters in Chemistry degree. As well as recording first class marks for every course she has taken since beginning her course in 2010, Rebecca was awarded the Royal Society of Chemistry Award for the best outstanding performance in analytical chemistry in 2013.

Nominated by Head of School of Natural and Computing Sciences, Professor Jan Skakle, Rebecca was also praised for her role as class rep and Secretary and Vice President of the Student Chemical Society, and the range of academic and social events she has arranged while in these roles.