Typhoid 50 years on: Pioneering research into cure for global killer
19 May 2014 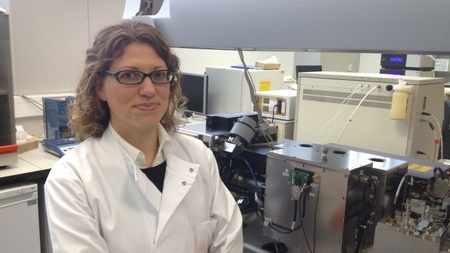 On May 20, 1964 the first cases of typhoid were identified in Aberdeen, in what marked the beginning of the largest outbreak of the infection in recent British history.

Fifty years on, a team of experts at the University of Aberdeen are leading pioneering research it is hoped may lead to a cure for the bacterial disease which claims the lives of 200,000 across the globe annually.

Dr Stefania Spanò, who joined the University from Yale at the end of last year, is spearheading the work, which could pave the way for new drugs to treat typhoid in the future.

She said: “To many, it may seem that typhoid is almost a historical disease.  But in developing countries where poor sanitation is a concern, it continues to kill hundreds of thousands of people each year, with 26 million new cases being diagnosed annually.

“Our work here in Aberdeen is seeking to identify what remains elusive – the molecules that have the ability to kill the pathogenic bacteria, Salmonella Typhi which causes the infection.

“It is just one in over 2000 types of Salmonella bacteria, but among the least understood. It is only in the last few years that biomedical research has begun to break ground in understanding the basis of this infection.”

Unlike most bacteria that are harmless and killed off by cells within the body called macrophages, pathogenic bacteria cause potentially deadly infections, and can survive within these cells.

Our work here in Aberdeen is seeking to identify what remains elusive - the molecules that have the ability to kill the pathogenic bacteria, Salmonella Typhi which causes the infection." Dr Stefania Spanò

“Typhoid is an infection that is unique to humans, “Dr Spanò continued, “We know that, unlike us, animals host macrophages within their bodies that have the ability to fight it.

“Our research is aiming to identify what is unique in the human biology that prohibits us from fending off Salmonella Typhi.”

Research Dr Spanò performed at Yale in the laboratory of Dr. Jorge Galán has already identified two molecules that are key to the process by which Salmonella Typhi is killed off in animals.

She said: “A transport pathway is a series of events by which a molecule is carried from one intercellular compartment to another.  It is critical to many processes that happen within a cell including the removal or killing of bacteria.

“Two molecules that are part of the transport process that occurs when Salmonella Typhi is destroyed have already been identified.

“But crucially what we are now seeking to identify is what we would call the ‘killing factor’ - the molecule that essentially delivers the fatal blow in killing the Salmonella Typhi pathogen.

“If we can identify this it would provide enhanced understanding of the infection that could in the long-term lead to the development of new drugs for its treatment.”