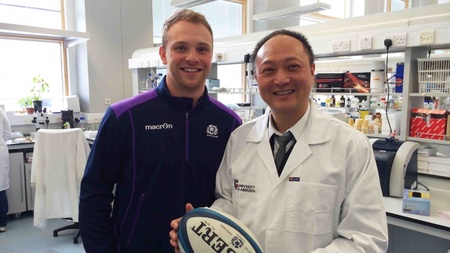 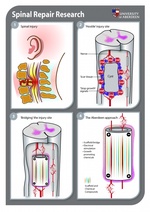 Scottish Rugby is helping fund pioneering research which is taking an innovative and multi-pronged approach to try to repair spinal cord injury.

University of Aberdeen scientists are believed to be the first in the world to use a combination of different methods - including a biodegradable ‘bridge’ made of silk fibre - to tackle this kind of injury which can be caused by falls, road accidents, medical conditions and injuries from a wide range of sports, including rugby.

The technique would involve placing a silk ‘bridge’ over the spinal injury wound and this would act as a scaffold for nerves to grow through.

Electrical and chemical stimulation would also be applied to the area in a bid to encourage nerve growth and reconnections.

Scientists in the Aberdeen Nerve Repair Group have begun a long term research programme to explore the potential use of this approach in spinal cord injury. It may also have potential for use in other conditions, such as brain injury and stroke.

It’s estimated that around 2.5 million people around the world live with the consequences of spinal cord injury. Around 40,000 of those are in the UK - more than half are males aged 15 to 30.

Dr Wenlong Huang, who moved from Imperial College in London to join the University’s Aberdeen Nerve Repair Group - formed thanks to the support of Scottish Rugby and funding from other donors - said: “Serious spinal cord injuries can result in movement and sensory loss below the point of injury.

“After the initial injury the nerves break or die and the communication signals carried by the spinal cord are lost. Myelin, the material that protects the nerve fibres, then breaks down and the immune system reacts and starts trying to fix the area. This leads to the formation of a fluid-filled cyst, surrounded by scar tissue, which physically prevents nerve regrowth.

“The original trauma is compounded by cells around the injury which produce ‘stop growth’ chemical signals which prevent the nerves from re-growing across the injury. This creates a hostile environment that is a barrier to nerve regrowth, and this is one of the reasons why patients with a serious spinal injury can end up with total paralysis.”

We are delighted to support this ground-breaking research here at the University of Aberdeen." Dr James Robson,
Scottish Rugby's Chief Medical Officer

The Aberdeen Nerve Repair Group is trying to overcome nerve repair hurdles by pooling the University’s world-leading expertise in electrical wound healing, nerve growth, tissue engineering and pre-clinical modelling of spinal cord injury. The development of the silk scaffolds will be done in collaboration with Oxford Biomaterials.

Dr Ann Rajnicek, Senior Lecturer and Aberdeen Nerve Repair Group scientist, said: “Our plan is to create an environment at the site of a spinal cord injury that will enable and encourage nerve cells to regrow and re-establish connections. A single strategy is not going to work with this kind of serious injury and that’s why we are taking a multi-faceted approach.

“We propose using a silk scaffold within the spinal cord cyst that would act as a structure to support nerve cell growth and then be absorbed into the body once it had served its purposes. At the same time electrical stimulation - which is already used in wound healing - would be applied to switch the chemical signals around the injury from ‘stop growth’ to ‘growth’. Such stimulation would also encourage nerve cells to move and grow.”

“It’s important to note that the benefits of taking part in rugby, just like any sport, far outweigh any possible risks. However at Scottish Rugby, we believe it is of fundamental importance that we create as safe a game as possible.

“We have undertaken a number of measures, especially within youth rugby, to enhance player welfare and we will continue to look at any areas where we can improve the health and wellbeing of our participants.

“Severe injury to the spinal cord remains, thankfully, a rare occurrence. If we can help scientists in their drive to regenerate damaged nerves then it will represent a considerable breakthrough.”

Professor Colin McCaig, Head of the School of Medical Sciences and Aberdeen Nerve Repair Group researcher, added: “We are delighted that Scottish Rugby is among those helping to support our research which is innovative and ambitious - although still at the very early stages.

“However our ultimate goal is to bring new regenerative strategies for spinal record repair to the clinic. If we can do that, these therapies could also benefit patients with stroke and brain injuries where nerve cell connections have also been lost.”

It’s estimated that around 2.5 million people worldwide live with the consequences of spinal cord injury including about 40,000 in the UK.

800-1000 new cases of spinal cord injury occur annually in the UK and are most commonly caused by falls, road accidents, certain medical conditions and injuries from a wide range of sports, including rugby.

More than half of cases with road accidents and sports injuries occur in males aged between 15-30 years old.

Less than 1% of spinal cord injuries show spontaneous recovery. So far there are no established regenerative therapies for spinal cord injury, highlighting the immense need for novel ways of approaching this challenge.

Spinal cord injury leads to movement and sensory deficits below the point of injury. This is because nerve cell death and tissue trauma prevent electrical signals from crossing the damaged area.

After the initial injury a fluid-filled cyst surrounded by a fibrous scar forms, making a powerful physical barrier that prevents nerve regrowth across the injury site.

In addition, cells in the spinal cord react to injury by producing chemicals near the scar that act as 'stop growth' signals, further preventing nerve regrowth.

The Aberdeen Nerve Repair group has brought together academics with combined scientific expertise that is unique in the UK.

They are developing a multifaceted approach to create conditions that will convert the chemical 'stop growth' signals to 'go' signals, whilst simultaneously providing a physical scaffold within the cyst to support nerve growth and an electrical environment that will coax nerves to grow across and out of the lesion.

It is also possible that the scaffold could be impregnated with slow-release, nerve growth promoting chemicals and electrical properties ahead of it being placed in the spinal cord cavity.

To treat spinal cord injury is an ambitious and long-term goal. The group aims to become a front-runner in regeneration research, by combining its unique collective expertise to contribute significantly towards this long-term undertaking.

Srategies to repair nerve connections in the central nervous system could also benefit patients with stroke and brain injuries.