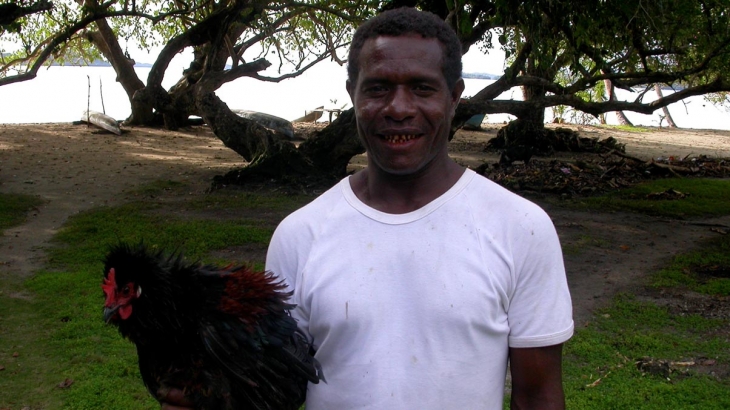 Did the Polynesians beat Columbus to South America? A new study of ancient chicken bones' DNA would suggest not.

A recent genetic study of ancient and modern chickens had claimed that Polynesian voyagers reached South America before European explorers.

But this has been challenged by new research, which has revisited the question of Polynesian colonisation of the Pacific by using the animals peopled carried with them to reconstruct early migration history.

The paper reveals that previous claims of contact between early Polynesians and South America were probably based on contaminated results. Instead, the new study has identified and traced a unique genetic marker of the original Polynesian chicken that is only present in the Pacific and Island Southeast Asia.

These modern chicken samples proved crucial to the study, helping us to identify and track the unique genetic signatures of original Polynesian chickens across the Pacific and revealing their origins in the Philippines." Professor Keith Dobney

The research team of national and international collaborators, which also included the Australian National University, the University of Sydney, and Durham University used DNA extracted from modern chicken feathers and bones excavated from archaeological sites from islands including Hawaii, Rapa Nui (Easter Island) and Niue.

Many of the modern samples used were collected as part of the ‘Lapita Voyage’, a sailing expedition from the Philippines to the islands of Anuta and Tikopia in West Polynesia made by two replica Polynesian catamarans back in 2009. Professor Keith Dobney, an Aberdeen University Scientist and co-author on the paper, joined the expedition sailing through the Solomon Islands and collecting hair and feather samples from domestic animals from remote island locations.

“These modern chicken samples proved crucial to the study, helping us to identify and track the unique genetic signatures of original Polynesian chickens across the Pacific and revealing their origins in the Philippines,” said Professor Dobney.

“Our research at Aberdeen, with colleagues from Durham and across the world, involves studying a range of domestic and invasive animals that were moved by people in the past. We’re using a range of techniques (including DNA) to test theories about where early human colonists of the remote Pacific came from, which routes they followed and whether they ever voyaged as far as the South American mainland."

Project leader Professor Alan Cooper, Director of ACAD says: “We were able to re-examine bones used in previous studies that had linked ancient Pacific and South American chickens, suggesting early human contact, and found that some of the results were contaminated with modern chicken DNA, which occurs at trace levels in many laboratory components. We were able to show that the ancient chicken DNA provided no evidence of any pre-Columbian contact between these areas.”

The modern samples collected by the “Lapita Voyage” also shows that the original Polynesian lineages still exist on some isolated Pacific islands, despite the wholesale introduction of European domestic breeds over the last few of hundred years,” Professor Cooper says. “These original lineages could be of considerable importance to the poultry industry which is concerned about the lack of genetic diversity in commercial stocks.”