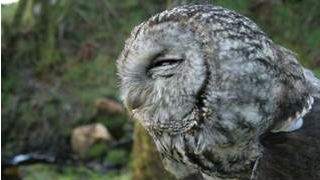 The future of tawny owls could be in doubt because of a dramatic decline in the numbers of field voles - their main prey.

The warning comes from scientists at the Universities of Aberdeen and Aix-Marseilles in France following analysis of data from a 27-year study of tawny owls and field voles in the Kielder Water and Forest Park in Northumberland.

Professor Xavier Lambin, Professor of Ecology, said of the study published today (March 14) in Global Change Biology: “We believe there is a substantial threat to the tawny owls that feed on field voles - not those that live in lowland habitats or deciduous woodland where their prey is mice - because of the changes in vole numbers.

“Tawny owls only breed when there is sufficient prey. If they breed, how many eggs they lay, and how successful they are when they fledge their chicks - all rely heavily on vole density. Tawny owls do take sabbaticals from breeding if there is not enough prey, but our studies have shown that nowadays they are taking too many forced sabbaticals and not breeding enough.”

Dr Alexandre Millon, lead author of the paper and now a lecturer at Aix-Marseilles Université, added:  ‘We also quantified to what extent our gloomy predictions for the future of owls could be altered by changing climate. Unfortunately, we found that owl reproduction is further deteriorated after wet and miserable winters, but the effect of vole scarcity on owls was much stronger than climate’.

Last year Professor Lambin and a team of international scientists published research which revealed there were fewer vole ‘outbreaks’ across Europe which they suspect could be due to climate change.

Ordinarily vole numbers vary enormously from year to year in a pattern which repeats itself every three to four years.

In a boom year - known as an outbreak - a patch of grass the size of a football pitch could be home to more than 500 voles. In a crash year, only a handful, maybe as few as one or two, would survive in the same area, although traditionally numbers would eventually rebuild again to reach the high densities of the previous outbreak.

Tawny owls do take sabbaticals from breeding if there is not enough prey, but our studies have shown that nowadays they are taking too many forced sabbaticals and not breeding enough." Professor Xavier Lambin

The researchers predicted that changes to this ‘boom and bust’ vole cycle would have a knock-on effect on other species where voles are the food-staple and where they also play a key role in the ecosystem.

“We were lucky to have access to this unique data from the Kielder Forest - much of which has been gathered by amateur enthusiasts - which has enabled us to dissect the birth and death rate of tawny owls,” said Professor Lambin.

“Our studies have shown a real demographic deficit in the tawny owl population which even an immigrant population of tawny owls, coming to the area from elsewhere, will not completely compensate.

“If conditions do not revert to how it used to be with vole boom and bust populations, this imbalance will lead to the population becoming extinct.

“However this would not be overnight - owls are quite long lived. Typically they live seven, eight, even up to 20 years, so without our data acting as a warning flag it would be a long time before the threat they are facing became obvious.”

Professor Lambin believes the problem could be much wider than the study actually shows.

“The Kielder Forest is representative of other manmade forests across northern UK. Moorlands also have the same sort of situation where voles used to have large outbreak years. And it’s not just tawny owls that feed on grass-eating voles – so do buzzards, kestrels, foxes, badgers and weasels,” he added.

“In addition, the climate change that we are seeing, with milder winters like this year, is not helping tawny owls. You might think that climate change could save these animals because it has not been a harsh winter. But winters like this one are very detrimental for owls because the birds need energy from food to keep warm when it is wet and windy. In the absence of plentiful voles, many vole-eating predators will decline irrespective of any improvement in the weather.”