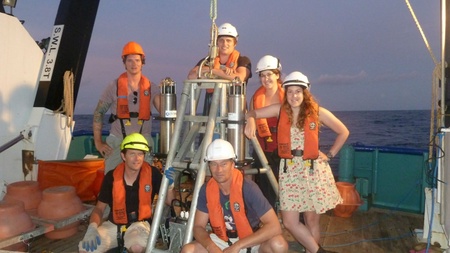 Scientists from the University of Aberdeen and New Zealand have captured on camera hours of footage of rarely seen animals.

It follows the world's first deep sea biology expedition to the New Hebrides Trench in the South Pacific.

From their exploration of the trench - which plummets to depths of over 7,000 metres or 4.5 miles - they discovered that life in some of the deepest places on Earth is not as predictable as once thought.

Instead marine life in the previously unexplored New Hebrides Trench - which lies east to the isle of New Caledonia, 1,000 miles north-west of New Zealand - was far sparser and less varied than expected.

The researchers also say their findings point to the possible impact climate change could have on deep sea life.

Voyage leader Dr Alan Jamieson, of the University of Aberdeen’s Oceanlab, which carried out the expedition in collaboration with the National Institute of Water and Atmospheric Research (NIWA) in New Zealand, said: “We set out to investigate whether the patterns of biodiversity in these medium depth trenches could be predicted by trends that we have observed in the really deep trenches that we’ve already studied elsewhere in the Pacific Rim.

“But what we found was an entirely different deepwater fish community.  Fish were surprisingly few in number and low in diversity and not at all what we expected. The fish we would always expect to see, the grenadiers, were completely absent. The fish that dominated the area were a group called cusk eels which are far less conspicuous elsewhere.

“As well as the difference in biodiversity we also stumbled across another surprise - the area in and around the New Hebrides Trench was swarming with large bright red prawns which are typically seen in very low numbers in other areas.”

Researchers deployed Oceanlab designed ultra-deep cameras and animal traps a total of 27 times between 2,000 metres and 7,000 metres deep in the New Hebrides Trench. A further nine deployments were made in the neighbouring South Fiji Basin.

The voyage unearthed a wealth of new video and nearly 10,000 images which are providing great insight into these deep sea communities" Dr Alan Jamieson

Thom Linley, fellow marine biologist from Oceanlab, said: “The big difference between this trench, and others that we have studied, is that the New Hebrides Trench lies underneath tropical, and therefore less productive, waters.

“The waters over a trench are what ‘feeds’ the deep sea community and in this case it appears that the prawns and cusk eels are specialists in low food environments. This means the huge expanses of the deep Pacific Ocean that span the tropical regions are likely to be largely inhabited by the cusk eels and prawns rather than the more diverse communities we see around the Pacific Rim.  If that is the case it also means that these animals are far more widespread than previously thought.

This was Dr Alan Jamieson’s eleventh expedition to the ultra-deep trenches of the Pacific Rim. He said of his latest 30-day trip: “The voyage unearthed a wealth of new video and nearly 10,000 images which are providing great insight into these deep sea communities.

“The team also obtained several extremely rare samples, of cusk eels, eel pouts, arrow-tooth eels and thousands of samples of small crustaceans which are now being curated in New Zealand and Australia.

“These new finds are a stark reminder that even the deepest parts of the world are intrinsically linked to the productivity of the surface waters.

“Should the current system change, it is highly likely to have significant cascading effects on the deep sea community. The deep sea is potentially a kind of silent victim in the era of a changing climate.”

The trip achieved the 100th deployment of Oceanlab designed remotely operated camera and bait equipment on what was also the last voyage of a seven year series of projects called HADEEP - The Hadal Environmental and Education Partnership.

The expedition was predominantly funded by the Foundation Total in France, with additional funding from NIWA with support from the Marine Alliance for Science and Technology, Scotland (MASTS).