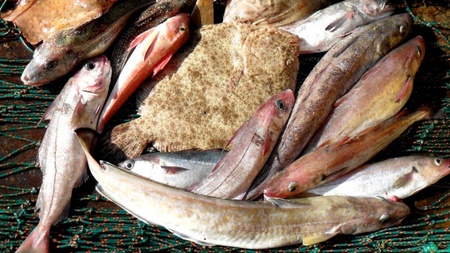 A decline in the length of fish in the North Sea could be linked to climate change, according to research led by Aberdeen scientists.

Over a 38-year period, the maximum body length of haddock, whiting, herring, Norway pout, plaice and sole in the North Sea has decreased by as much as 29%, coinciding with an increase in water temperatures of between 1 and 2 degrees Celsius*.

Although the six species differ in their biology their simultaneous decrease in maximum body length suggests that the common experience of increasing temperatures may be contributing to a detectable synchronous change in individual growth rates across species.

It’s hoped that the findings by University of Aberdeen fisheries scientists and colleagues, published today (Tuesday January 28) in Global Change Biology, will promote further research to investigate the impacts of climate change on fisheries productivity.

Dr Alan Baudron, Research Fellow at the University’s School of Biological Sciences led the study, which was funded by Marine Scotland Science (MSS).

He said: “We used data collated by the International Council for the Exploration of the Sea reporting the age and length of commercial fish in the North Sea for over 40 years.

“Our analysis showed that the majority of species examined – specifically, haddock, whiting, herring, Norway pout, plaice and sole – experienced a synchronous reduction in their maximum length over the time period.

“What is interesting is that this was detected across a range of fish species eating different diets, living at different depths and experiencing different levels of fishing mortality.

The increase in temperature of the North Sea is actually quite subtle - approximately 2 degrees Celsius - yet this appears to be having a detectable impact on growth rates of fish." Dr Alan Baudron

“The synchronicity suggests that the one common factor they all experienced – increasing water temperatures – could have been at least partly responsible for the observed reductions in length. The timing of the reduction in maximum length coincided with years when water temperature in the North Sea increased.

“Our findings are consistent with current understanding of the physiology of fish. Because fish are “cold-blooded” animals their metabolic rates are determined by the ambient temperature.

“In general, fish grow more rapidly during their early life when temperatures are warmer. The consequence of rapid juvenile growth is that they become mature at a smaller length and therefore don’t grow as large as they would have in colder waters.

“Other factors, such as food availability or fishing pressure, also contribute to variability in body length. However, we showed that it is less likely that these factors could explain the synchronous change in length observed across species.”

Dr Coby Needle of Marine Scotland Science (MSS), Aberdeen, who collaborated in this study added: “This study contributes important information to help us address the issue of how fish growth is changing through time and highlights the importance of considering environmental issues when managing fisheries.”

“However, the synchronous reduction in length did not apply to all species – cod, for instance, did not conform to it. It is also important to remember that these other factors - food availability and fishing pressure - may have impacted growth individually for each species along with the common effect of temperature, and will continue to do so into the future. ”

Dr Baudron continued: “The increase in temperature of the North Sea is actually quite subtle - approximately 2 degrees Celsius - yet this appears to be having a detectable impact on growth rates of fish.

“It’s known that sea temperatures are increasing at different rates globally. We would anticipate that synchronous reductions in length across species could be occurring in other regional seas experiencing a strong degree of warming. A comprehensive global evaluation is required in order to fully assess the impact of rising water temperatures on fish stocks.”