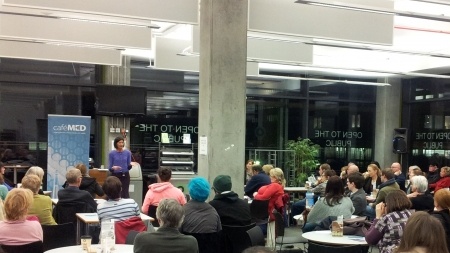 The University of Aberdeen's public engagement activity will kick off in the New Year with the launch of two new programmes in addition to several already established and popular event series'.

The various programmes will showcase many of the different research areas being pioneered across the University, with over thirty academic and guest speakers featuring in 23 evening events across the five programmes.

New programmes for 2014 include a special season of events in the form of Discovery Gallery with Aberdeen Maritime Museum, as well as a new series entitled Inspirational Inaugurals which will celebrate recent leaders in the fields of life sciences and medicine to have joined the University.

The popular community discussion series’ Cafe Scientifique, CafeMED and Café Controversial will all return in 2014.

Dr Ken Skeldon of the University’s Public Engagement with Research Unit said “The public events led by our own academic community continue to draw large audiences and attract enthusiastic feedback. The five series launching in January mark just the start of another exciting year of the University engaging with communities locally and beyond.”

We're delighted to introduce some of our new internationally leading recruits to the University through this fascinating series of lectures" Professor David Reid, Head of School of Medicine and Dentistry at the University of Aberdeen

The programmes, which take place in various venues on campus and in the city, offer a mix of topical subjects and major themes with highlights including:-

Commenting on the Inspirational Inaugurals series, Professor David Reid, Head of School of Medicine and Dentistry at the University said: “We’re delighted to introduce some of our new internationally leading recruits to the University through this fascinating series of lectures. The topics being discussed all involve the public and patients at various stages of their Pathway to Healthy Living, and so we look forward to welcoming people to this new series to hear of our work at first-hand.”

Dr Rhiannon Thompson of the Public Engagement with Research Unit added: “Our café discussion series and other programmes allow the public to experience first-hand how the University is pushing the boundaries of knowledge. Our events also anchor into major initiatives such as National Science & Engineering Week and our University May Festival, programmes for which will be launching in the Spring.”

Events across all the series are free to attend and require no booking except for Discovery Gallery where booking through Aberdeen Maritime Museum is strongly recommended.

Full information of the programmes including venues, dates and booking details where appropriate is available at www.engagingaberdeen.co.uk