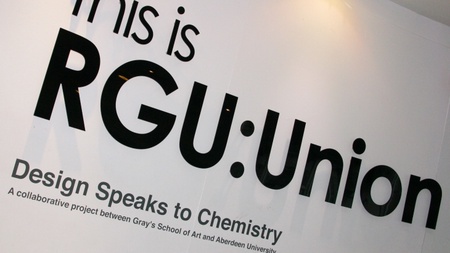 An innovative partnership between Gray's School of Art and the University of Aberdeen has seen designers' interpretations of scientific concepts go on display.

The exhibition, entitled Design Speaks to Chemistry, involved more than 100 third year design students and took its inspiration from a lecture by Dr. Peter Henderson, a Teaching Fellow at the University of Aberdeen.

Revolving around the central theme of liquid crystals, the students formed cross-disciplinary groups which took in fashion and textile design, product design, 3D design and communication design to come up with their ideas.

The exhibition, which aims to make science accessible and engaging, was developed over the course of four weeks and will be on display in Robert Gordon University’s (RGU) Student Union at Schoolhill until January 6. The work featured ranges from interactive displays to clothes.

Dr. Henderson said: “I didn’t know what to expect when this collaboration was first mentioned, but I’ve been really impressed with what the students have come up with.

“It was exciting to see how they developed their ideas and the way they translated the concepts I talked about in my lecture into physical work. The students were all very enthusiastic and engaged from the start and it was good for our PhD students to be involved too, as it helped them think about how to explain and present their research.”

Heather Doran, a project officer with the public engagement and research team at the University of Aberdeen, said: “This is the first time we’ve tried anything like this and it was great to see the way the students approached the project. They have come up with a whole range of very original pieces for different audiences which will support us in trying to get people to engage with chemistry in various ways. It is always useful for researchers to be challenged on how they can make their work as accessible as possible.”

Charlie Hackett, lecturer in fashion and textiles at Gray’s School of Art, added: “This has been a really interesting project for the students to work on, as they have had to engage with something that they do not necessarily know anything about. Designers need to be able to engage with a huge variety of different things in an informed way and also work together across a range of disciplines so it’s been a great experience and the range of work that has been produced is impressive.”

Design Speaks to Chemistry is on display at the RGU Student Union, Schoolhill, Aberdeen until Monday, January 6.