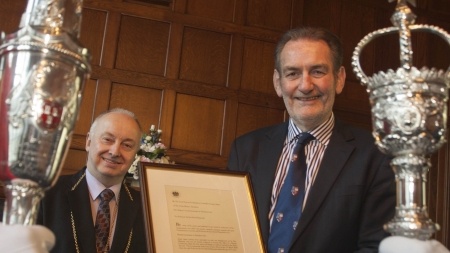 The Principal and Vice Chancellor of the University of Aberdeen, Professor Sir Ian Diamond, was made a Deputy Lieutenant at a special ceremony at the city's Town House, Broad Street, yesterday (Thursday, December 5).

This special commission was given by Aberdeen’s Lord Provost George Adam in his role as Lord-Lieutenant.

The Lord Provost, by virtue of his office, is also Her Majesty’s Lord-Lieutenant of Aberdeen.  The Lord-Lieutenant is the monarch's personal representative within the city boundary and may commission deputies to act in his absence.  Duties which Sir Ian will be able to assist the Lord Provost with include Royal visits, citizenship ceremonies, nominating individuals for national honours and liaising with the armed forces.

The Lord Provost George Adam said:  “Sir Ian is a huge asset to Aberdeen and his knowledge and talents will be a great help to the Lieutenancy.  This is an honour which he wholeheartedly deserves, and which I am very proud to bestow on him."

Principal and Vice Chancellor of the University of Aberdeen, Professor Sir Ian Diamond said: “I am deeply honoured to be asked to perform the role of Deputy Lieutenant, which is steeped in history and still very relevant today. It will be a delight and a real privilege to serve our local community in this way. It is also a reminder of the centuries of close links between town and gown, and our common role in service to our city.”

"By The Lord Provost of Aberdeen, Councillor George Adam, of The Town House, Aberdeen, Her Majesty’s Lord-Lieutenant of Aberdeen City.  To Professor Sir Ian David Diamond. By virtue of the power and authority in me vested by section two of the Lieutenancies Act 1997 I do hereby constitute nominate appoint and grant Commission to you the said Professor Sir Ian David Diamond to be a Deputy Lieutenant of Aberdeen City (your name having been presented to and not disapproved of by Her Majesty); and you are hereby required to execute the office of a Deputy Lieutenant within the City and in all things to conform yourself to the duties thereof.  This Commission shall cease to have effect on the 14th March 2029 when the said Professor Sir Ian David Diamond attains the age of 75 years.  Given under my hand at this fifth day of December in the year of our Lord Two thousand and Thirteen.  George Adam, Her Majesty's Lord-Lieutenant."

The Lord-Lieutenant and Sir Ian were joined at the ceremony by a Town Sergeant bearing the Aberdeen City Council mace, and the Sacrist of the University of Aberdeen bearing the Marischal College mace.

The Marischal College mace is an ancient symbol of authority which dates back to the 1660s while the City Council's mace is a modern design from the 1950s.

Images are the copyright of Aberdeen City Council.