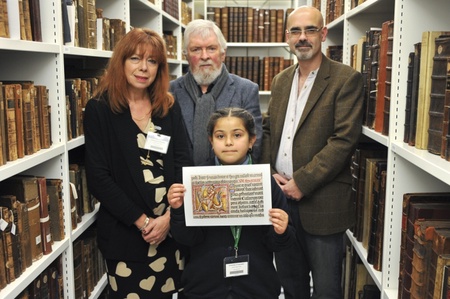 The University of Aberdeen's Special Collections Centre revealed the winners of its Flash Fiction writing competition at a prize giving ceremony last week.

As part of Book Week Scotland 2013 writers of various ages, experiences and backgrounds were asked to take inspiration from four images from the Special Collections Centre’s rare books and archives collections and write a short story of 500 words.

Award winning authors Dr Wayne Price and Caroline Clough were given the tough job of judging the 138 entries, with Wayne choosing an adult winner and Caroline selecting the best story from the children’s category.

The winners were named as Richard Bennett, 71, and Eleanor Tuladhar-Douglas, aged 9, who both received prizes donated by Waterstones Union Bridge, which supported the competition.

Wayne Price said: The overall winner faced stiff competition, but after much thought I went for the story that most intrigued me and that I most looked forward to re-reading at each phase of judging. ‘A Welsh Incident’ has many qualities but what particularly struck me was the fluency with which it combines realist and surrealist modes to prepare the ground for a startling and haunting final paragraph.

Caroline Clough  who had the difficult task of picking an entry from the children’s category said: “I couldn’t believe it when I found out Eleanor was only nine years old as her writing showed a great deal of maturity. Her piece was extremely imaginative and superbly written.

“Flash Fiction is a difficult genre as in the space of a few hundred words the writer must convey atmosphere, feelings, a sense of place and time, not to mention a plot, characters, and a structure of a beginning, a middle and an emotionally satisfying end.

Flash Fiction is a difficult genre as in the space of a few hundred words the writer must convey atmosphere, feelings, a sense of place and time, not to mention a plot, characters, and a structure of a beginning, a middle and an emotionally satisfying end." Caroline Clough

“This being the case, I was very impressed, not only with the number of entries, but with the diversity and depth of creativity of those brave writers that entered the competition.”

Richard, who won with his story entitled A Welsh Incident was delighted to find out he won. He said: “I was a runner up in the competition last year so I am delighted to have been named the winner this year.”

Eleanor, who attends St Peter’s RC Primary School in Aberdeen, was excited to attend the ceremony, joined by some of her classmates.

Eleanor, whose class all entered the competition as part of their school work, received a goody bag and a book voucher for writing her piece, Defonia and The Magic Stick.  She said: “I felt really happy when I found out my story had won. I enjoyed working on the story as part of my school project as it was good to do something a bit different.”

All the Flash Fiction entries can be viewed by visiting http://www.abdn.ac.uk/library/about/special/book-week-scotland/