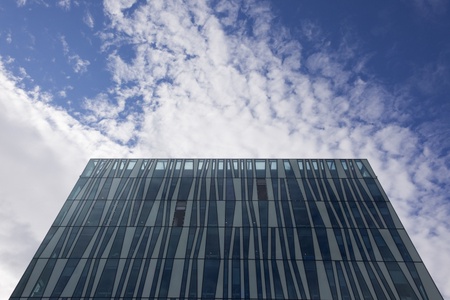 The University of Aberdeen's Sir Duncan Rice Library has been named the overall winner in the Scottish Awards for Quality in Planning.

The library, through the iconic, innovative boldness of the architecture, represents the aspirations of the University to be a leading example of a future-thinking and innovative educational establishment on the global stage." Project manager Callum Proctor, of the University of Aberdeen

The joint efforts of Aberdeen City Council and the University of Aberdeen secured the award for the striking cube-shaped building on the King's College campus in Old Aberdeen. The council's corporate headquarters Marischal College was among the buildings shortlisted for the prize.

The council's planning team worked closely with the university to ensure that the library, which was entered in the Development on the Ground category, formed a new focus for the campus and enhanced its attractiveness as a place of study for members of the university and a facility for local communities.

The Sir Duncan Rice Library has replaced the Queen Mother Library and Special Library and Archives. It provides a world-class facility for learning in an innovative, unique and architecturally outstanding building.

"The library is a statement for outstanding architecture and the benefits of innovation and creativity. The development bravely reminds the public that a University is not just a seat of learning but part of the community."

The council's head of Planning and Sustainable Development, Dr Margaret Bochel added: "We are absolutely delighted that the efforts of the university and council teams to ensure that the Sir Duncan Rice library was a high-quality, striking and innovative building which benefited not only the university, but also the community, have been recognised at such a high level.

"Aberdeen City Council recognised the importance and value of the development and worked very closely with the university's design team to deliver the university's aspirations while also responding to the historic and very sensitive environment of the adjacent Old Aberdeen Conservation area."

The main aims of the project included:
•providing a library which complemented the delivery of world-class teaching and research through a campus of excellence and reflecting the internationally-important collections in its care;

•creating an iconic building reinforcing the reputation of the UK's fifth and Scotland's third-oldest university as an innovative, progressive and attractive place to study;

•providing a focal point for the university and local communities, integrating cultures and providing facilities to stimulate exchange of knowledge;

•delivering creative and innovative design solutions to overcome the challenges presented by developing a sensitive site in a historic environment and conservation area, where knowledgeable local community groups area active in the preservation of the area and its historic buildings;

•minimising running costs and energy use.

An international design competition was held, which led to the commissioning of Schmidt Hammer Lassen Architects to work on the project, with a highly creative and innovative design team assembled by the university.

Extensive discussions were held with Aberdeen City Council regarding the siting and design of the eight-floor building before the finalised design, marking the ice and light of Northern Scotland, was lodged with the planning authority in 2007. The application was unanimously approved by councillors later that year.

In outlining their reasons for giving the award, the judges stated: "There was a comprehensive masterplanned approach, as well as dialogue with a design panel. The aim, however, was not just to design a library which provided a quality high-specification learning space but to make sure that the planning process, as well as its outcome, was community orientated.

"The intention was to frame the building within a well-designed and functional place which was carefully stitched into the fabric of the existing neighbourhood.

"Throughout the development of the building every effort was made to ensure the local community were part of its evolution, such as allowing inputs on travel plans, the public spaces and landscaping. Plus, the vision was to ensure that all its users did not 'enter a world of silence' in the traditional sense of a library but rather to feel inspired, within a beautiful space, in their local area.

"Quite simply, it is a stunning building, which operates sustainably, and is set within high quality public realm. It welcomes everyone to enjoy its space - both outdoor and indoors."