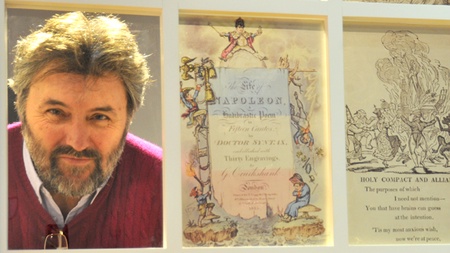 Award-winning Guardian cartoonist Steve Bell visited the University of Aberdeen as part of an exhibition of historical cartoons and caricatures.

Print Shop Window: An Exhibition of Visual Satire features political imagery from the University’s Special Collections, and as part of the event Steve will give a talk on campus on Friday (November 15).

The talk is part of a programme of events to accompany the lively exhibition which is proving to be a popular success.

Steve has produced illustrations and comic strips for many publications including Punch, Private Eye, The New Statesman, The Spectator, Time Out and Social Work Today.

As part of a lively and candid talk, he will discuss the lasting influence of the early pioneers of visual satire. Since 1981 he has written and drawn the daily If…strip in The Guardian.

He created the memorable image of John Major with his underpants worn outside his trousers, of Tony Blair with Margaret Thatcher’s rogue eyeball, and of George W Bush as a chimpanzee. His work has been published and exhibited all over the world.

The talk is part of a series of public events built around an exhibition of cartoons and caricatures which features images by William Hogarth, James Gillray, and George Cruikshank, acknowledged as superstar artists of the reign of George III, (1738-1820), an era dubbed the ‘Golden Age of Caricature’.

On Thursday 21 November, Dr Helen Pierce discusses Graphic Satire & Politics in Early Modern England and the final talk in the series will see Deputy Archivist with the Special Collection, Andrew MacGregor deliver a talk on the History of Parody.