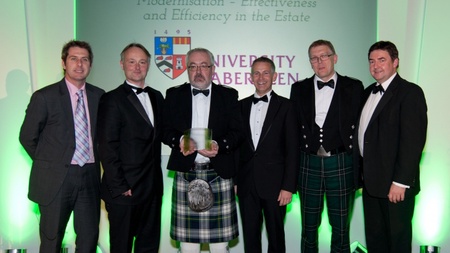 The new low carbon IT data centre for all further and higher education institutions in north-east Scotland has won a prestigious UK wide sustainability award as well as a top Computing & IT industry award.

In a double celebration, the project was also named Data Centre Project of the Year in the BCS & Computing UK IT Industry Awards – covering the UK’s entire IT industry, beating off competition from Tesco, Capital One and the NHS.

The ten month, large-scale, complex and high risk project saw an upgrade to the live primary data centre at the University of Aberdeen. The goal was to turn an aged data centre into a state of the art shared data centre for all tertiary educational establishments in the North East of Scotland and spearhead a shared-service approach.

“These awards means a tremendous amount,” said Project Chair and Head of Service Management at the University of Aberdeen, Brian Henderson. “These important sector and industry-wide awards are great recognition to the team for a prolonged and excellent piece of work.

“They also reward the individual institutions’ leap of trust in taking a true shared service approach to achieving our business and sustainability goals.”

The project has reduced the sector’s carbon footprint by more than 1,400 tonnes annually, as well as slashing energy bills by more than a quarter of a million pounds each year.

The Green Gown Awards judges complimented the team’s approach to the project, saying: “We particularly liked the fact that this was a multi-organisational project and that it involved joint working between Further Education and Higher Education.

“Significant technical and other barriers would have needed to be overcome. The savings are impressive and the organisations are continuing to work together on other projects.”

These important sector and industry-wide awards are great recognition to the team for a prolonged and excellent piece of work." Brian Henderson
Project Chair and Head of Service Management, University of Aberdeen

Using the external supplier Workspace Technology Ltd and specialist in-house staff, the major objective was to develop a shared-service approach, while delivering significant institutional savings by allowing institutions to vacate current environmentally unfriendly facilities which were unsustainable based on current performance and future requirements.

The capital funding for the upgrade project was provided entirely by the four partner institutions.

The Green Gown awards were presented by Professor Iain Stewart presenter of a number of BBC programmes including the BAFTA nominated Earth: The Power of the Planet.

He said: “Sustainability is one of those ideas that means something different to everyone. And yet we all have a clear notion of what is “unsustainable”. The Green Gown Awards are about celebrating a shift in thinking within the university and college sector to embrace and support those that are really pushing ahead with meaningful ways of making a future that works for all.”

Now in their 9th year, the Green Gown Awards recognise the exceptional sustainability initiatives being undertaken by universities and colleges across the UK. With sustainability moving up the agenda, the Awards have become established as the most prestigious recognition of best practice within the further and higher education sector.

David Clarke, MBE, Group Chief Executive Officer of BCS, The Chartered Institute for IT, said: “Congratulations to all the winners and those who were highly commended in the 2013 awards. The Awards recognise the professionalism and innovation that exists in IT. The quality of applications we received this year was excellent, but the winners stood out as exceptional and inspiring, and should be very proud of their success.”

Stuart Sumner, Editor of Computing commented: “Well done to the winners and those who were highly commended on their achievements. The UK IT Industry Awards are rigorously judged and truly celebrate innovation and best practice in IT today.”

The BCS & Computing UK IT Industry Awards provide a platform for the entire profession to celebrate best practice, innovation and excellence. In total, this year’s Awards featured 25 categories which covered: project, organisation, technology and individual excellence. The categories were open to organisations and individuals involved in IT across the public, not for profit and commercial sectors.