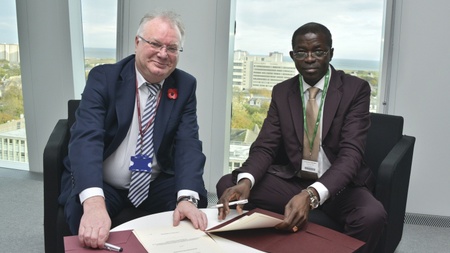 The new Aberdeen Institute of Energy was among topics discussed during the visit to campus last Friday of Gabon's Minister of Education.

Minister Seraphin Moundounga was welcomed to the University by Senior Vice-Principal Professor Stephen Logan, with whom he signed a Memorandum of Understanding during the visit.

The ministerial party, together with representatives of the British Council, met University experts in energy teaching and research, including engineering, economics, geosciences, law, drug discovery and international development.

The University team heard from the Minister on the ambitions of the West African country to maximise the potential of its considerable natural resources, including offshore hydrocarbons, and the government's quest to build capacity through international partnerships.

Among Aberdeen experts meeting the Minister were Professor Jim Anderson, head of the University's energy research theme, and John Scrimgeour, new director of the recently-established Aberdeen Institute of Energy, which will build on the University's long experience in oil and gas - and its interdisciplinary team approach to finding solutions for the challenges faced by the energy industry today - to create a new centre of energy excellence on the King's College campus.

The party visited the resonance-enhanced drilling (RED) laboratory, and heard about the University’s unique training facility for explorationists, exploHUB.  They also visited the Marine Biodiscovery Centre to hear more about the potential of natural compounds sourced from the deep ocean  to fuel new ideas in developing novel pharmaceuticals.

The party also visited the Sir Duncan Rice Library to see the stunning study facilities provided on campus for Aberdeen students, and heard about the range of support available for our international student community.