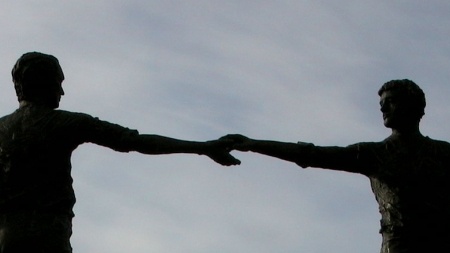 Major challenges including how governments handle pathways from conflict to peace will be explored at a University led week of events highlighting the impact of social science research.

The Aberdeen programme is part of the UK wide Festival of Social Science coordinated by the Economic and Social Research Council.

As part of the festival, a discussion event exploring how societies and governments have managed major political change will take place. The Pathways to Peace event will take place on November 7 from 7 – 8.30pm at the Sir Duncan Rice Library led by Dr John Nagle of the University’s Institute for Conflict, Transition, and Peace Research (ICTPR).

Dr Nagle said: “International examples indicate that states undergoing transition experience social and political disruption. We’ll explore broader impacts of change, such as Scotland’s Independence referendum, in terms of a range of issues including similar independence movements, democratic transformation, peacekeeping, the plight of refugees, masculinities and the radicalisation of youth.

“This discussion is particularly topical in view of the extreme degree of international insecurity caused by current regional and local violent conflicts. Given the global impact of these conflicts, there is a pressing need to understand the problems associated with various societies making the transition from conflict to sustainable peace. The transitions we will explore include those from authoritarianism to electoral democracy such as the Arab Spring, from civil war to uneasy peace such as Northern Ireland and Sierra Leone, and from independence to new state, for example Kosovo.”

International examples indicate that states undergoing transition experience social and political disruption. We'll explore broader impacts of change, such as Scotland's Independence referendum, in terms of a range of issues including similar independence movements, democratic transformation, peacekeeping, the plight of refugees, masculinities and the radicalisation of youth. " Dr John Nagle

Dr Ken Skeldon of the University’s Public Engagement with Research Unit said: “Social science affects our everyday lives in various ways from influencing behaviours to impacting on policy making. The Festival events offer just a snapshot of projects being undertaken here in Aberdeen.”

Rhiannon Thompson of the Public Engagement with Research Unit added:  “The Festival of Social Science is a fantastic opportunity to discover and discuss some of society’s big issues and challenges. Some events will be of particular interest to local rural communities for example, discussions of satellite broadband in Gartly and Lumsden led by our dot.rural digital economy research hub. Meanwhile in Aberdeen, a PechaKucha presentation night will showcase eight more topics in social science through the power of imagery.”

Alongside the public programme, researchers from the University are visiting schools through a Café Junior initiative to explore topical issues, including those in social science, that stimulate learning in areas of the curriculum for excellence.

The Aberdeen public programme of events is available at www.engagingaberdeen.co.uk featuring the rural discussion evenings in Gartly on November 5 and Lumsden on November 7. The PechaKucha night takes place in Aberdeen’s Belmont cinema on 5 November. All events are free to attend.

The ESRC Festival of Social Science takes place 2- 9 November 2013 with a local programme of events taking place across Aberdeen and Aberdeenshire. For the full local programme and venue details please visit www.engagingaberdeen.co.uk