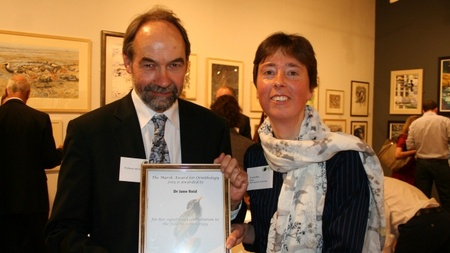 A University of Aberdeen zoologist has been awarded a major national prize for her research into the ecology and genetics of bird populations.

The British Trust for Ornithology (BTO) has honoured Dr Jane Reid from the institution’s School of Biological Sciences with the Marsh Award for Ornithology.

The prize recognises Dr Reid’s long-term field studies of wild bird populations, which have enhanced understanding of the genetic and ecological forces that influence how birds respond to environmental change.

The award also recognises Dr Reid’s efforts in communicating her research to the wider public, and in training young ornithologists of the future.

Dr Reid’s studies of Red-billed Choughs on Islay have seen her work closely with local enthusiasts and farmers, academic colleagues and conservation agencies to understand the causes of population declines and help focus conservation interventions where they can be most effective.

She has also used long-term studies of Starlings on Fair Isle, Song Sparrows in British Columbia, Ring Ouzels in the Scottish Highlands, and Shags in eastern Scotland to provide new insights into ecological and evolutionary dynamics.

It's a real privilege to receive the Marsh Award. The BTO's commitment to integrating the work of amateur and professional ornithologists is critically important. It's a goal that I wholeheartedly support, and to which I am delighted to have contributed" Dr Jane Reid from the University of Aberdeen's School of Biological Sciences

Dr Reid was presented with the accolade by Professor Ian Newton, Chairman of the British Trust for Ornithology, and Professor Bill Sutherland, President of the British Ecological Society, on behalf of The Marsh Christian Trust, at a ceremony held at the Mall Galleries in London last night (Wednesday October 30).

She was nominated for the Marsh Award for Ornithology by its previous three winners, Dr Jenny Gill, Dr Ian Hartley and Prof Jeremy Wilson, who commended Dr Reid as “an outstanding ornithologist who has contributed hugely to the field through her extremely high quality research, her dynamic approach to addressing important scientific issues and her deep commitment to developing young researchers and engaging a wide range of audiences”.

Dr Reid has served as a member of the BTO’s Ringing Committee and BTO and as a supportive member of the editorial board of Ringing and Migration and is a Director of the Fair Isle Bird Observatory Trust.

Dr Reid said: "It’s a real privilege to receive the Marsh Award. The BTO’s commitment to integrating the work of amateur and professional ornithologists is critically important. It’s a goal that I wholeheartedly support, and to which I am delighted to have contributed."

The Marsh Award for Ornithology is made to an ornithologist who is making a significant contribution to the field. Amongst other things, the selection panel considers the significance of the research undertaken so far, contributions to training and capacity-building within ornithology, alignment with the BTO’s mission and engagement with the wider ornithological community.