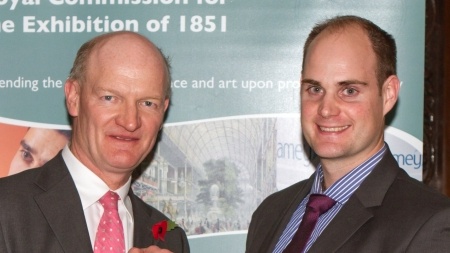 A University of Aberdeen chemist has been awarded a £80K fellowship to support his development of a material that helps damaged bones to heal.

Jordan Conway has received the accolade from the Royal Commission for the Exhibition of 1851 for his work with medical device company SIRAKOSS.

The company, which spun out from the University of Aberdeen in 2011, has developed a number of synthetic bone graft substitutes that replace the need to harvest the patient’s own bone, or use cadaver bone. This technology aimss to deliver rapid and successful bone repair, reducing the time patients spend in the operating theatre, post-operative pain and potential for disease transmission involved in cases of bone defects or trauma.

The Fellowship will support further research into a load-bearing material to stimulate bone growth which it’s hoped will increase the clinical applications of this novel technology.

Only eight Industrial Fellowships are awarded by the Royal Commission for the Exhibition of 1851 each year, providing young scientists and engineers with the means to develop an innovative commercial technology with the potential to secure a patent.

First established by Prince Albert to stage the Great Exhibition of 1851 in the eponymous Crystal Palace, the Royal Commission now awards a number of fellowships and grants to support industrial education.

The Industrial Fellowships form a crucial part of this work, with the specific aim of encouraging profitable innovation in British industry.

Jordan received his award at the 2013 Fellowships Award Ceremony hosted by the Royal Commission for the Exhibition of 1851 at Imperial College London on Tuesday evening (October 29).

The Fellowship is invaluable for an early stage company like SIRAKOSS, allowing us the time and funding to perfect a new technology that has real commercial potential." Jordan Conway, co-founder and employee of SIRAKOSS

Jordan who is a co-founder and employee of SIRAKOSS said:“The Fellowship is invaluable for an early stage company like SIRAKOSS, allowing us the time and funding to perfect a new technology that has real commercial potential. It also gives me the opportunity to complete my PhD while working, and recognises the important role that academia has to play in developing ideas and technologies for industry.”

Brian Butchart, Chief Executive of SIRAKOSS commented “We are delighted that Jordan was selected for this fellowship and the impact will be significant for the company enabling it to progress this R&D well ahead of all previous plans. This award endorses both the potential for the technology and the quality of the individual. It was all the more pleasing to hear at the awards ceremony that Jordan’s success came in a year that the Royal Commission received the largest ever number of applicants”.

Professor Iain Gibson, who will supervise Jordan’s PhD at the University of Aberdeen, said: “This is a very prestigious award and we are delighted that Jordan will be carrying out his PhD research here in Aberdeen. This fellowship provides a unique opportunity for Jordan to support and enhance his professional development, which is a key component of postgraduate study at the University of Aberdeen. Thirteen Noble Prize winners received awards from the Royal Commission for the Exhibition of 1851 at some stage in their careers, including Lord Ernest Rutherford and more recently Professor Peter Higgs, so Jordan is joining a very prestigious ‘1851 family’ through receiving this award.

Bernard Taylor, Chairman of the Royal Commission for the Exhibition of 1851, said: “The Commission aims to encourage innovation across the whole breadth and depth of British industry in the 21st century. Jordan’s work is a perfect example of this diversity, which also fulfils the Fellowship’s aim to fund the development of profitable and patented technologies. We congratulate Jordan on his success so far and look forward to following his success in the future.”

The Rt Hon David Willetts MP, Minister for Universities and Science, said: "The Government is committed to ensuring that the UK is the best place in the world to do science. To achieve this we must support the development of scientific ideas into commercially viable and profitable technologies. These in turn drive the economy and keep the UK ahead in the global race.

“The Royal Commission for the Exhibition of 1851 has been supporting this aim for a number of years. I would like to congratulate all the talented young scientists and engineers who have taken part in the Fellowships Award Ceremony. Their achievements, and ambitious plans for the future, show the diversity of talent and innovation that exists across the UK.”

For more information on Royal Commission for the Exhibition of 1851 Fellowships visit www.royalcommission1851.org.uk/ind_fellow.html