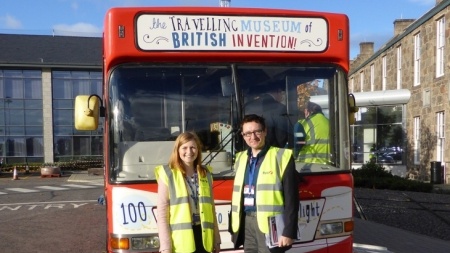 First in Scotland has donated one of its buses to arts organisation, Sing London, which has entirely refurbished the bus transforming it into a mobile museum fitted with 100 of Britain’s most important inventions, discoveries and social innovations.

From the jet engine to the NHS, gravity to radar, penicillin to hawk eye, the museum features a roll call of British achievement.

The bus is visiting Aberdeen this week and its first stop was First’s HQ in King Street. First Aberdeen and FirstGroup staff took the opportunity of looking around the bus this afternoon and were joined by pupils from Hanover Street Primary School. The bus will also visit Kittybrewster Retail Park, Northfield Academy and local attraction Satrosphere this week. Admission is free and the bus is designed for people of all ages.

First Aberdeen’s Operations Manager, David Adam welcomed the museum to the city and said: “The bus looks fantastic.  It’s full of lots of wonderful surprises and it’s incredible that so much has been packed on board.”

“First staff across Scotland and thousands of our customers will have the opportunity of seeing the Museum – as part of its national tour it will visit city squares, shopping centres, schools, libraries and two or three of our bus depots across the country.”

We're delighted to support the Museum Bus visit to Aberdeen. It is a great opportunity to celebrate the rich history of discovery from Aberdeen and the North East in areas from health to quantum physics. " Dr Heather Doran

Aberdeen City Council’s Convener of Education, Culture and Sport Jenny Laing said: “Sing London’s innovative and winning approach to mass participation events is well-known.  I would encourage everyone to get on board and take a tour on this very special travelling museum. To think that all these inventions, discoveries and innovations were created by the British and how they have helped change the world is amazing.”

Dr Heather Doran of the University of Aberdeen’s Public Engagement with Research Unit, added “We’re delighted to support the Museum Bus visit to Aberdeen. It is a great opportunity to celebrate the rich history of discovery from Aberdeen and the North East in areas from health to quantum physics.”

Producer of the Travelling Museum, Colette Hiller from Sing London, thanked First for its support and said: “Danny Boyle has made it ok for us to blow our own trumpets and to celebrate British achievement.  Whether you’re from the UK or have adopted it, The Travelling Museum aims to give us all a blast of collective pride.”

The Travelling Museum is produced by Sing London, the participatory arts organisation whose interventions aims to lift the public’s spirit. The project is funded by The Scottish Government &, The Royal Academy of Engineering.  Additional support comes from First who donated the bus, and from CNM, a Welsh computer company who supplied technology.

From the jet engine to the NHS, gravity to radar, the museum features a roll call of British achievement. Inventions are packed into 9 themed cabinets of wonders. Visitors will find penicillin in the medicine cabinet, the raw plug in the toolbox and Hawk eye in the Trophy cupboard.  Each exhibit tells a concise story using intriguing anecdotes, surprising artefacts and even the odd jar of facts.

There is one cabinet, which changes en route to highlight local achievement. Dolly the Sheep, will feature In Lanarkshire and in Ayrshire, the pneumatic tyre. In this way, bus visitors will get a real sense of local contribution.

Although there are 100 exhibits, visitors won’t be able to see them all.  Instead, visitors opt for a themed ‘bus route’ and are given keys to unlock just 10 boxes.

The 100 British Inventions, discoveries and social innovations featured on the bus:

Some curious facts about British invention

1) When first presented with the jet engine, the British government gave it the thumbs down, calling it ‘impractical’

4) In 1547 Golf was banned in Scotland by James II because it distracted people from military training for wars against the British.

5) The toothbrush was invented by William Addis, whilst he was in prison. He made it using pig bristles and beef bone.