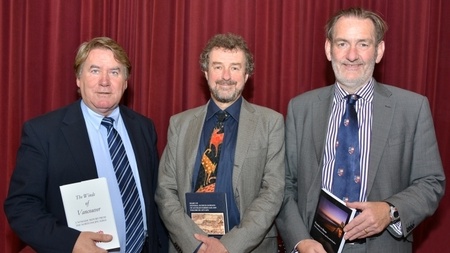 Fascinating works of history, research, poetry, science, biographies and cultural gems of Scotland will be brought to bookstores through the re-launch of the publishing arm of the University of Aberdeen.

The move furthers the University's commitment to excellence not only in the work of its academic community, but also in communicating this work to a wide audience.

Announcing the news, Professor Sir Ian Diamond, Principal and Vice-Chancellor said: “This is an important further step in our engagement not only with academic colleagues worldwide but with the many people in all walks of life who will, I know, welcome the diverse programme we will be publishing over coming months.

“Our publications will cover a broad spectrum, be very accessible, and offer something for all audiences. We have a well-established reputation in publishing works on Scottish culture and history, and to this we will add publications covering all areas of study and achievement, including significant literary works in Gaelic.”

This is an important further step in our engagement not only with academic colleagues worldwide but with the many people in all walks of life who will, I know, welcome the diverse programme we will be publishing over coming months. " Professor Sir Ian Diamond, Principal and Vice-Chancellor

The first title under the new imprint will be Vita Mea, the autobiography of Scottish literary scholar and Aberdeen alumnus, Sir Herbert Grierson (1866–1960). Also included will be the complete Diaries of Patrick Gordon, in 6 volumes. Aberdeenshire-born Gordon was Peter the Great's top military adviser and founder of the Russian navy. This will be the first time these treasures, currently held in the national archives in Moscow, are published in English in their complete form.

He said: “Aberdeen University Press published many important works in its long history. Some of them, like Nan Shepherd’s Living Mountain (first published 1977), have gone on to be classics of their kind. Others, like Michael Fry’s Patronage and Principle: A Political History of Modern Scotland (1987), remain standard works in the field. Our aim is to make AUP once again a leading publisher in Scotland of academic research and of all forms of creative and documentary writing.”

The former Aberdeen University Press began in 1840, and flourished under the stewardship of the local King family printers, becoming registered in 1900 as a Public Company. The Aberdeen University Press thrived through the 20th century, printing educational and local interest books and journals, going through a series of mergers and takeovers, and growing its publishing activity through the 1980s. However the company ceased trading in 1993, having become entangled with the collapse of the Maxwell publishing empire.