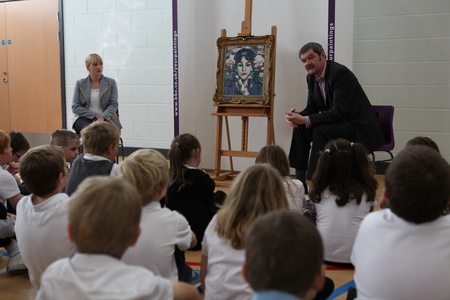 Pupils at Rosehearty Primary School became curators of a world famous masterpiece owned by the University of Aberdeen last week.

The one-day loan was part of a Public Catalogue Foundation initiative called Your Paintings: Masterpieces in Schools which is being led by contemporary British artists Bob and Roberta Smith and John Byrne and supported by BBC Learning.

Hortensia - a 1910 oil painting of a woman by the Scottish colourist John Duncan Fergusson – arrived at the school early in the morning and P4 - P7 pupils were given the opportunity to view the artwork whilst listening to Professor John Morrison, a History of Art Lecturer at the University, as he skilfully guided them through an analysis of the work.

There were many suggestions about the identity of the sitter, including proposals that she was maybe his lover or perhaps a queen or policewoman.

Younger classes also examined the work in discussion with Shona Elliott, a Curator at the University of Aberdeen Museums.

After the talks, pupils went to their classrooms to create their own masterpieces inspired by the painting. Some worked in pairs to create a collage effect, others created a large version of Hortensia by combining individually painted squares, whilst other pupils copied the image using paint and oil pastels.

Ms Elliott said: “The University of Aberdeen’s museum collections are among the most important in Scotland. We have been delighted to work with the Public Catalogue Foundation and BBC Learning to arrange for the loan of one of the most important of our hundreds of paintings to Rosehearty School.”

The University of Aberdeen offers many activities to engage the public with its research and expertise, including exhibitions, activities for schools, talks, festivals and events coordinated by the University’s award-winning public engagement with research unit to inspire, motivate and interest many different people.

Janet Stewart, Public Engagement with Research Coordinator in the University’s College of Arts & Social Sciences said: “This was a wonderful opportunity for Professor John Morrison, a leading expert in Scottish painting, to share his knowledge with local school children and for him to learn from their creative engagement with this important work of art in the University collections.”

The project is part of Your Paintings, an ongoing initiative to increase access to the UK’s national art collection, which can be explored at www.bbc.co.uk/yourpaintings. Launched in June 2011, the site currently shows over 200,000 oil paintings from 3,200 collection venues across the UK, including c. 400 oils owned by the University of Aberdeen.  The BBC website now also features curriculum-based slideshows full of ideas for using paintings in the classroom. Designed to inspire schools to use great art in teaching and learning, they are complemented by profiles of different careers in the art world. The website already includes many resources for teachers to use, including a guide to artistic styles and movements; biographies of some of the world’s greatest artists; and over 200,000 artworks with details of where to see them for real.

The initiative has seen a selection of famous paintings by the likes of Gainsborough, L. S. Lowry, Monet, Turner and the Scottish Colourists, worth an estimated £14 million will being taken into 27 primary and secondary schools across the UK, loaned from a selection of UK public art collections.   The scheme is a new venture designed to inspire young people and encourage them to explore the UK’s rich and varied painting collection.