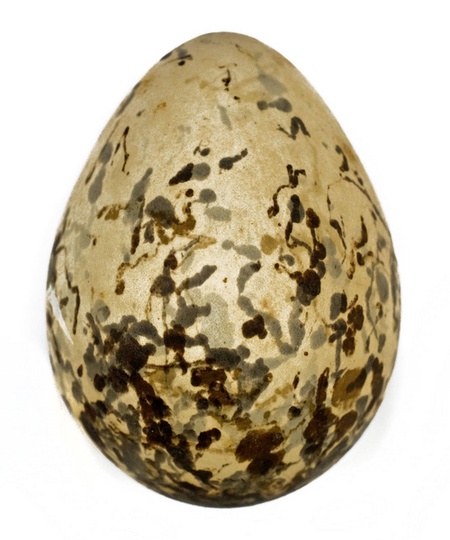 The only known egg in the world of a critically endangered bird from India has been discovered at the University of Aberdeen.

The Jerdon’s Courser Rhinoptilus bitorquatus is a plover-like species known to inhabit only a tiny area of land in southern India.

Its breeding habits are a mystery and its nest and eggs have never been found by ornithologists.

DNA analysis was used to identify the egg as belonging to the bird, after it was unearthed within a old collection at the institution’s Zoology museum.

It is now hoped the discovery could help conservationists working to save the species in India.

Dr Alan Knox, the University’s Emeritus Head of Museums who found the egg among a collection dating back to the 1900s, said: “I was looking through drawers of uncatalogued eggs in the University’s Zoology Museum when I spotted an egg labelled as belonging to this species.  It was one of those eureka moments – finding something nobody else knows about, something so rare and exciting. I could hardly believe my eyes.

“My first question was how do you identify something that the books say has never been discovered?

“Very little is actually known about this extremely rare bird which inhabits an area only a few kilometres wide.  It was seen only a few times in southern India before it was presumed extinct around 1900. It was rediscovered in 1986 but is listed as a critically endangered species.

“Without any others to compare it with, the process of correctly identifying the egg was a challenge.”

Dr Knox took the egg to the largest egg collection in the world at the Natural History Museum in Tring, Hertfordshire, where it was found to be similar to, but not the same as, the eggs of other courser species.

The identification was only confirmed after DNA was extracted from dried up membrane very gently scraped from the inside of the egg.

It was found to match DNA taken from the toe of a 140-year-old Jerdon’s Courser skin from Tring.

Professor Stuart Piertney of the University’s Institute of Biological and Environmental Sciences, who carried out this delicate work said: “It is extremely challenging to get DNA out of eggs from museum collections, but highly rewarding when it identifies something so very rare within our own museum. It also highlights what wonderful repositories of untapped information about the natural world museums can be, and how we can open it up using new technologies.”

The egg is part of a small collection put together by Ernest Meaton, a veterinary surgeon working at the Kolar Gold Fields to the east of Bangalore, probably in 1917.

His collection was bought and given to Aberdeen Grammar School in 1919 by George Rose, a former pupil. Rose, who was born in Orkney, was a successful engineer in the jute industry, based in Calcutta. He returned to Aberdeenshire to live at Tullich Lodge near Ballater, and at Auchernach in Strathdon.

The Grammar School gave the egg collection to the University in the 1970s where it lay unexamined for 30 years, until Dr Knox opened the drawers.

Dr Knox added: “We are hoping the discovery will help conservationists working to save the species in India. They will now know what the eggs look like, and there is a possibility the species may still exist in scrub-jungle nearer to the Kolar Gold Fields.”

Details of the discovery have just been published in the Journal of the Bombay Natural History Society.

The egg will be on display in the University’s Zoology Museum when the current refurbishment is completed.