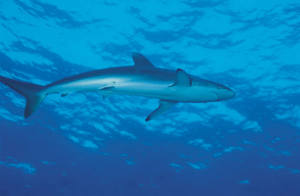 Aberdeen scientists are investigating if antibodies found naturally in sharks could be used to target breast cancer.

Worldwide Cancer Research, the Scottish cancer research charity, has awarded biologists from the University of Aberdeen a grant of over £200,000 to analyse if IgNAR – a special antibody found only in sharks – can be used to inhibit the growth of cancer cells.

The three-year study will look at two molecules - called HER2 and HER3 - found on the surface of cancer cells.

When these molecules pair-up on the surface of a cancer cell, they signal it to grow and divide.

The study will investigate if shark IgNAR antibodies can be used to stop these two molecules from working and sending this signal.

The research could pave the way for the development of new drugs to fight breast cancer in the future.

Around one in four women with breast cancer have a type referred to as HER2-positive breast cancer, where a very high level of HER2 is found on the surface of cancer cells.

HER2-positive breast cancer can be successfully treated with drugs however resistance to treatment is an increasing problem.

Dr Helen Dooley, from the University of Aberdeen’s School of Biological Sciences who is leading the study, said: “Our work centres on a type of antibody, called IgNAR, which is uniquely found in the blood of sharks.

“IgNAR antibodies are interesting because they bind to targets, such as viruses or parasites, in a very different way to the antibodies found in humans. They can do this because their attachment region is very small and so can fit into spaces that human antibodies cannot.

“We believe we can exploit the novel binding of IgNAR and use it to stop HER2 and HER3 molecules from working, and prompting cancer cells to grow and divide.

“With the funding from Worldwide Cancer Research we can begin to explore the potential of IgNAR as a future treatment for breast cancer. This is only the first step in a very long process but if our hypothesis holds true we hope to develop new anti-cancer drugs based upon these unique shark antibodies.”

Lara Bennett, Science Communication Manager for Worldwide Cancer Research said: “We believe that funding research projects like Dr Helen Dooley’s is so important for the future development of more effective treatments to help patients who become resistant to drugs like Herceptin.

“We wish Helen and her team at the University of Aberdeen the best of luck and look forward to reading her reports in due course.”

To help raise awareness of the research project and the work of Worlwide Cancer Research, the only cancer research charity to fund fundamental and translational research for any cancer on an international basis, Dr Dooley and the charities CEO, Norman Barrett, will be doing a shark dive at Deep Sea World, North Queensferry, on Thursday, September 26.

For more information on the work of Worldwide Cancer Research, visit their website at http://www.worldwidecancerresearch.org/