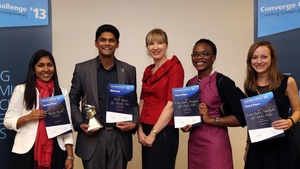 An eye movement test to assist diagnosis of major adult psychiatric disorders has taken a step closer to being commercialised after winning a prestigious national contest recognising Scotland's entrepreneurial innovations.

The plan to commercialise the test for use in mental health care worldwide beat off competition from five other finalists in the 2013 Converge Challenge Awards held on Tuesday (September 24), to scoop a prize of £60,000.

Dr Philip Benson, a senior lecturer at the University of Aberdeen's School of Psychology and one of the academics behind the test said: “We’re absolutely delighted to have won this prestigious Scottish competition. The win is a testament to the strength of our business proposition and this enables us to move forward quickly with the University to commercialise the eye movement test through a new company.

“Our congratulations also go out to the other winners and everyone who made it to the final.

Dr Benson continued: “Delivering an accurate and timely diagnosis remains one of the most pressing responsibilities of modern psychiatry. There aren’t any objective diagnostic tests available to routinely validate decisions made by clinicians.

Supporting the academic team to address the many challenges in delivering this type of assistive tool into the broad sphere of global healthcare is Mr Madhu Nair, a technology entrepreneur and Saltire Fellow with experience in developing early stage opportunities in the software and life science sectors both in the UK and US. Mr. Nair, who delivered the final pitch for the team at the awards, said: “The Converge Challenge experience was central in the process of getting our business plan investor-ready and we are honoured to be recognised as the winner in this year’s competition which attracted a record 60 applicants. We aim to use the cash prize to leverage further match funding and form a company to bring our product to market.

“Our simple eye movement tests can recognise schizophrenia and other major psychiatric disorders with better than 95% accuracy and within 30 minutes – a step change for psychiatry. The need is significant with 1 in 5 adults suffering from some form of mental ill health during their lifetime and 5% developing major psychiatric disorders. It is the largest cause of disability worldwide costing a staggering US$2.5T per annum.”

Dr Rachael Wakefield, Technology Transfer Officer at the University of Aberdeen working with the team on the business opportunity, said:  “It’s been a pleasure to work with the Saccade team over the last two years and to explore with them the commercial potential of this technology.  I’m thrilled for the team on their achievement; they are very motivated to see this tool become a real benefit to patients and professionals.  The whole Converge Challenge process has been invaluable to them and together with the support from the Royal Society of Edinburgh Enterprise Fellowship programme as well, we have the best opportunity to make this successful."

Another University of Aberdeen pre-start up company, Isatis, also reached the top 10 of the competition and will receive 12 months of business support from Converge. Isatis will develop a new drug based on Professor Robert Barker’s work at the University of Aberdeen’s Department of Medicine and Therapeutics which seeks to find a new treatment for the serious blood disease Immune Thrombocytopenia.

The competition was open to staff, postgraduate and final year students of all Scottish Universities and Research Institutes and is the largest business competition and entrepreneurial training programme in Scotland.

The Saccade Diagnostics team is also participating with the University of Aberdeen on the Design Council’s Design Leadership programme receiving expert advice and training on the design aspects of the service model.