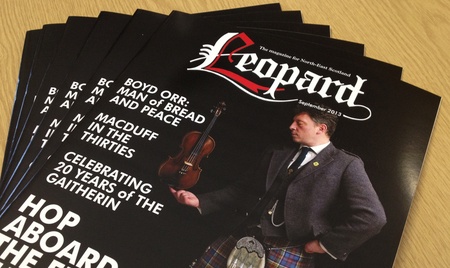 Leopard magazine, the well-loved showcase of North-east life, people, places, history and heritage, is now on the streets under its new owner, the University of Aberdeen.

Leopard was established in 1974, and for the last 12 years has been owned and published by Lindy Cheyne and Ian Hamilton.

The September issue is the first to be published by the University, and is available on subscription and at local newsagents throughout the North-east.

The acquisition was welcomed by University Rector Dr Maitland Mackie, who said: “I’m just delighted that the University has had the foresight and temerity to take on ownership of Leopard magazine. From being a wee cub, back in the ‘70s, Leopard has grown to become a reliable, friendly and entertaining source of fascinating information on the history, culture, environment, achievements – and the very special people – of the region of which we are so proud. At the same time it’s kept us abreast of current developments and contemporary issues which are all shaping the ‘local history of tomorrow’.”

The University is home to many areas of research and teaching which have always featured prominently in the Leopard. Professor Ian Russell, Director of the University’s Elphinstone Institute, added: “The North-east is such a special place, and there’s great interest in our cultural heritage and history, and how we are keeping it alive today, here and across the diaspora. Colleagues and I at the University have long considered Leopard to be a vital means of celebrating this outstanding region and its place in the world.”

The new editor of the Leopard is Judy Mackie, who together with husband Allan Montgomery bring many years of editorial and publishing experience as M&M Media, based in Aberdeen. Judy said: “Lindy and Ian have done a marvellous job with Leopard and we have a great deal to live up to - not least in preserving the warmth, loyalty and goodwill that the magazine has generated among its readers. It will be our pleasure and privilege to work with the University - our alma mater - to build on Lindy’s and Ian’s achievements, and also to add some new ideas that we hope will appeal to both current and new readers. We look forward to people getting in touch to share their own thoughts and ideas.”

Former editor Lindy Cheyne said: “Ian and I are confident that the culture of the North-east, nurtured by Leopard, is secure with the University of Aberdeen, with which we have had such strong traditional links. We look forward to seeing the magazine go from strength to strength”.