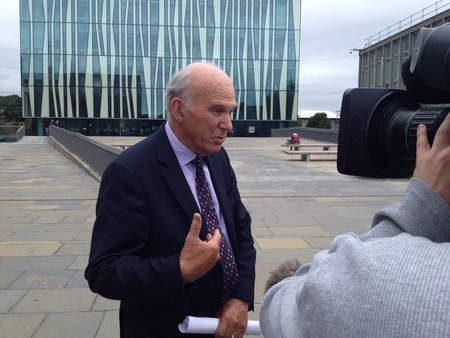 Business Secretary Vince Cable visited the University of Aberdeen today (Thursday) for a discussion with the Principal before taking in some of the latest research projects.

Dr Cable was introduced to the newly appointed director of the new Aberdeen Institute of Energy as part of a tour of the engineering department.

Later he spoke with Professor Marcel Jaspars at the Marine Discovery Centre where he was shown how the synthetic biology process, which is currently underpinned by funding from  Biotechnological and Biological Sciences Research Council, is used to make anti-cancer drugs.

He hailed the exciting and important work being carried out at the institution during the visit prior to travelling to the Offshore Europe exhibition at the AECC.

The Business Secretary announced that more young people and teachers will be given the chance to get behind the scenes of the manufacturing industry as part of an expanded Government and industry scheme.

See Inside Manufacturing (SIM) involves businesses opening their doors to young people and teachers, allowing them a first-hand view of modern manufacturing and the exciting careers available.

The Oil & Gas, Offshore Wind and Life Science sectors are now included in SIM which has expanded from three to ten sectors.

Business Secretary Vince Cable said: “See Inside Manufacturing plays an important part in challenging outdated perceptions of manufacturing. In the past year alone it has helped thousands of young people see just how dynamic the industry is, with nearly nine in ten saying they would now consider a career in manufacturing.

“Today’s expansion sees seven more sectors involved, including oil and gas, offshore wind and the life sciences, all of which are crucial to supporting the growing UK economy. I share the enthusiasm shown by manufacturers to inspire young people to get involved in these rewarding careers."